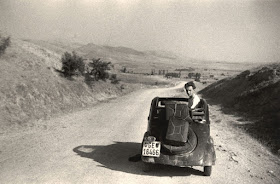 Nicolas Bouvier, Thierry Vernet on the road to Ankara, Turkey,  1953


“Traveling outgrows its motives. It soon proves sufficient in itself. You think you are
making a trip, but soon it is making you - or unmaking you.”

“Traveling provides occasions for shaking oneself up but not, as people believe, freedom.
Indeed it involves a kind of reduction: deprived of one’s usual setting, the customary
routine stripped away like so much wrapping paper, the traveller finds himself reduced to
more modest proportions - but also more open to curiosity, to intuition, to love at first sight.”

“In the end, the bedrock of existence is not made up of the family, or work, or what others
say or think of you, but of moments like this when you are exalted by a transcendent power
that is more serene than love. Life dispenses them parsimoniously; our feeble hearts could
not stand more.”

“That day, I really believed that I had grasped something and that henceforth my life would
be changed. But insights cannot be held for ever. Like water, the world ripples across you and
for a while you take on its colours. Then it recedes, and leaves you face to face with the void
you carry inside yourself, confronting that central inadequacy of soul which you must learn
to rub shoulders with and to combat, and which, paradoxically, may be our surest impetus.”

“The over-ripe, golden autumn which had taken hold of the town tugged at our heartstrings.
The nomadic life makes you sensitive to the seasons: you rely on them, even become part
of the season itself, and each time they change, it seems to have to tear yourself away from
a place where you have learned to live.”

"At daybreak the smell from the ovens drifted across the snow to delight our noses; the smell
of the round, red-hot Armenian loaves with sesame seeds. . .Only a really old country rises to
luxury in such ordinary things; you feel thirty generations and several dynasties lined up
behind such bread."

“The splendid wooden mosque - which you can find if you search - nobody would think of
showing you, being less aware of what they have than what they lack. They lack technology:
we want to get out of the impasse into which too much technology has led us, our sensibilities
saturated to the nth degree with Information and a Culture of distractions. We’re counting on
their formulae to revive us; they’re counting on ours to live. Our paths cross without mutual
understanding, and sometimes the traveler gets impatient, but there is a great deal of self-
centeredness in such impatience.”

"When I went home there were many people who had never left who told me that with a
bit of imagination and concentration they travelled just as well. I quite believed them. They
were strong people. I'm not. I need that physical displacement, which for me is pure bliss." 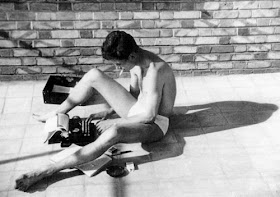 Nicolas Bouvier writing on the terrace of a hotel in Tehran, 1954


Nicolas Bouvier (1929  – 1998) was a 20th-century Swiss traveller, writer, picture editor and
photographer. He studied in Geneva in the 1950s and lived there later between his travels.

Bouvier was born at Grand-Lancy near Geneva. Between the ages of six and seven, he devoured
Jules Verne, Curwood, Stevenson, Jack London and Fenimore Cooper. "At eight years, I traced
with my thumbnail the course of the Yukon in the butter of my toast. Already waiting for the
world: to grow up and clear off."

His father encouraged him to travel and in 1953, without waiting for the result of his degree,
he left bourgeois Switzerland with no intention of returning. In a small, slow Fiat, he and his
friend Thierry Vernet  travelled across Europe and Asia over nineteen unforgettable months,
pausing in Belgrade, Istanbul, Tabriz and Quetta to paint, write and wait tables, taking
longer than Marco Polo - as Bouvier proudly pointed out - to reach Japan.