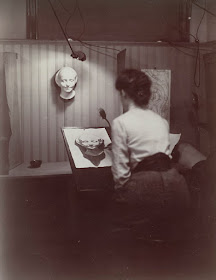 L'Inconnue de la Seine (The Unknown Woman of the Seine) was an unidentified
young woman whose putative death mask became a popular fixture on the walls of
artists'homes after 1900. Her visage inspired numerous literary works.

According to an often-repeated story, the body of the young woman was pulled out
of  the Seine River at the Quai du Louvre in Paris around the late 1880s.
Since the body showed no signs of violence, suicide was suspected. 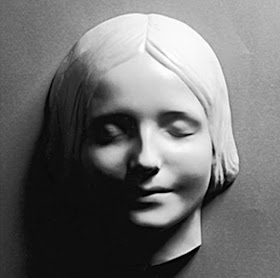 A pathologist at the Paris Morgue was, according to the story, so taken by her beauty
that he felt compelled to make a wax plaster cast death mask of her face. It has been
questioned whether the expression of the face could belong to a drowned person.
According to other accounts, the mask was taken from the daughter of a mask
manufacturer in Germany. The identity of the girl was never discovered.
Claire Forestier estimated the age of the model at no more than 16,
given the firmness of the skin. 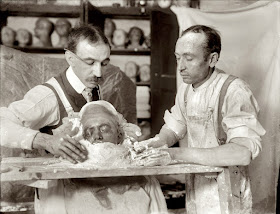 Two men in the process of making a death mask, New York, 1908

In the following years, numerous copies were produced. The copies quickly became
a fashionable morbid fixture in Parisian Bohemian society. Albert Camus and others
compared her enigmatic smile to that of the Mona Lisa, inviting numerous speculations
as to what clues the eerily happy expression in her face could offer about her life,
her death, and her place in society. 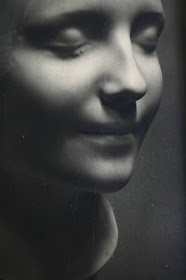 "The caster I visit every day has two masks hanging next to his door. The face of
the young one who drowned, which someone copied in the morgue because it
was beautiful, because it was still smiling, because its smile was so deceptive
– as though it knew."


“To us she is a tender butterfly, who—
winged and lightheartedly—
had her tender wings prematurely singed.”

“Urging on life’s denouement,
loving nothing upon this earth,
I keep staring at the white mask,
of your lifeless face.” 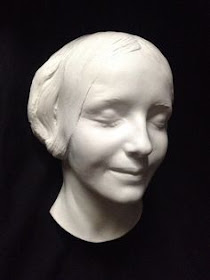 Ironically, the first CPR model was made in the image of L’Inconnue. Norwegian
toymaker Asmund Laerdal and Austro-Czech physician Peter Safar based their
“Rescue Anne” doll off of the famous death mask in 1958. The doll was designed to
assist with CPR training, and remains in use to this day. As a result, L’Inconnue
came to be known as the woman with “the most kissed face” in history. 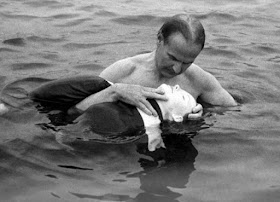 Today, the Laerdal company estimates that two million lives have been saved by CPR.

The lyric "Annie, are you OK?" from the Michael Jackson song "Smooth Criminal"
actually stems from American CPR training, in which students practise speaking
to their unresponsive plastic patient, CPR Annie.