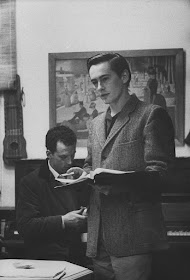 I ' d draw all this into a fine element , — a color .
Rosy , rust - red , Orange white.
It ' s love ; I bring it , hair - on - end.
A reflection in my eyes — part of this still room ,
our strange shape — and I put my hands
to you — like cool jazz coming.
Seeing these designs we make in pure air.
I ' m half - man , half - snake — and you
A BURROW
There are no words but color and muscled form
AND THIS IS NOT IT
I can't remember that instant
and I alter it to elegance
to flowers and animals--and no speech
covers the blankness.
I'm filled perfectly, giving your gift to me.
AND THIS IS NOT IT
This is failure, no trick, no end
but speech for those who'll listen.
I cry 'Love, Love, Love, Love Love,'
but this is not my voice--
these are enormous forms
Rosy, rust-red, Orange, white! 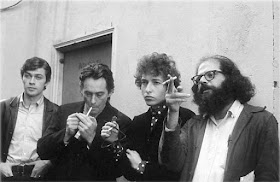 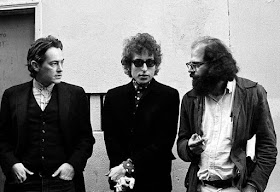 In 1965 Allen Ginsberg arranged for Larry Keenan and fellow student photographer Dale Smith
to photograph him, Michael McClure, Robbie Robertson and Bob Dylan in the alleyway behind
City Lights  Bookstore (originally for possible use on the Blonde on Blonde album cover).

And I must sleep 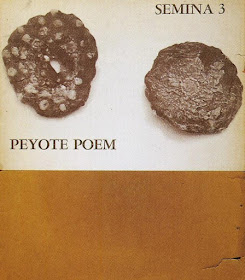 "I am free from time. I accept it without triumph
— a fact.
Closing my eyes there are flashes of light.
My eyes won't focus but leap. I see that I have three feet.
I see seven places at once!
The floor slants — the room slopes
things melt
into each other. Flashes
of light
and meldings. I wait
seeing the physical thing pass.
I am on a mesa of time and space."


Michael McClure attended Robert Duncan's poetry workshop at San Francisco State College
and through Duncan, met Kenneth Rexroth. He became a regular on the San Francisco poetry
scene, and it was McClure who arranged for Ginsberg to speak at the Six Gallery in November
1955. McClure would later gain notoriety for writing the play, The Beard. The play was banned
and the actors in the early productions were routinely arrested at the end of each performance.
Peyote Poem is one of Michael McClure's first published poems.