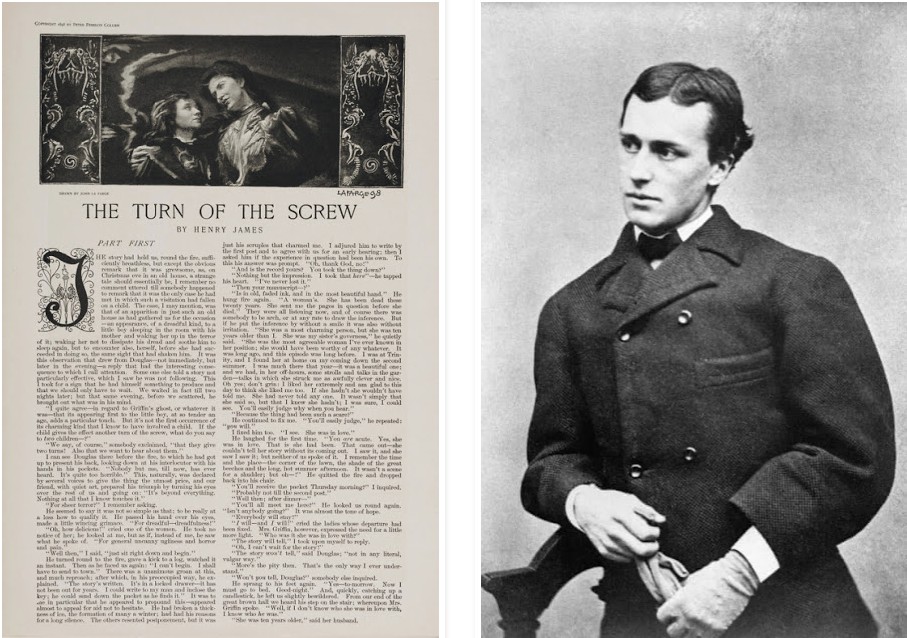 “He was there or was not there: not there if I didn't see him.”

“I was a screen-- I was their protector. The more I saw, the less they would.”

“Of course I was under the spell, and the wonderful part is that, even at the time, I perfectly
knew I was. But I gave myself up to it; it was an antidote to any pain, and I had
more pains than one.”

“—his indescribable little air of knowing nothing in the world but love.”

“The summer had turned, the summer had gone; the autumn had dropped upon Bly and had
blown out half our lights. The place, with its gray sky and withered garlands, its bared
spaces and scattered dead leaves, was like a theater after the performance--all strewn
with crumpled playbills.”

“We were alone with the quiet day, and his little heart, dispossessed, had stopped.”

“Make (the reader) think the evil, make him think it for himself, and you are released from
weak specifications. My values are positively all blanks, save so far as an excited horror,
a promoted pity, a created expertness... proceed to read into them more or less fantastic
figures.”

“To gaze into the depths of blue of the child's eyes and pronounce their loveliness a
trick of premature cunning was to be guilty of a cynicism in preference to which I
naturally preferred to abjure my judgment and, so far as might be, my agitation.”

“I take up my own pen again - the pen of all my old unforgettable efforts and sacred
struggles. To myself - today - I need say no more. Large and full and high the future
still opens. It is now indeed that I may do the work of my life. And I will.”

“There was nothing in the room the next minute but the sunshine and a sense that I must stay.”

“The terrace and the whole place, the lawn and the garden beyond it, all I could see
of the park, were empty with a great emptiness.”

“...he uttered the cry of a creature hurled over an abyss...”

“I call it relief, though it was only the relief that a snap brings to a strain or the burst of
a thunderstorm to a day of suffocation. It was at least change, and it came with a rush.”

“It may be, of course, above all, that what suddenly broke into this gives the previous time
a charm of stillness—that hush in which something gathers or crouches. The change was
actually like the spring of a beast.”

“I seemed to float not into clearness, but into a darker obscure, and within a minute there had
come to me out of my very pity the appalling alarm of his perhaps being innocent. It was for
the instant confounding and bottomless, for if he were innocent, what then on earth was I?”

“I had the view of a castle of romance inhabited by a rosy spirit, such a place as would
somehow, for diversion of the young idea, take all colour out of story-books and fairy-tales.
Was n't it just a story-book over which I had fallen a-doze and a-dream?”

“I could only get on at all by taking "nature" into my confidence and my account, by
treating my monstrous ordeal as a push in a direction unusual, of course, and unpleasant,
but demanding, after all, for a fair front, only another turn of the screw of ordinary
human virtue.”


The film opens with a creepy song written by Paul Dehn and Georges Auric
sung over a black screen for about forty-five seconds before the
Twentieth Century Fox logo appears.

* Deborah Kerr always regarded this as her finest performance.

** François Truffaut regarded this as the best British movie since Sir Alfred Hitchcock
had left for America. 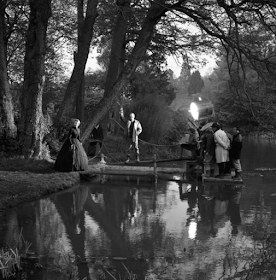