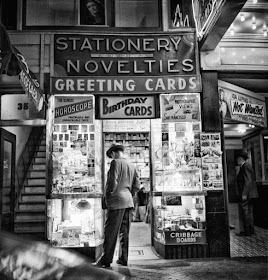 “When he was in college, a famous poet made a useful distinction for him. He had drunk enough
in the poet's company to be compelled to describe to him a poem he was thinking of. It would
be a monologue of sorts, the self-contemplation of a student on a summer afternoon who is
reading Euphues*. The poem itself would be a subtle series of euphuisms, translating the
heat, the day, the student's concerns, into symmetrical posies; translating even his contempt
and boredom with that famously foolish book into a euphuism.

The poet nodded his big head in a sympathetic, rhythmic way as this was explained to him,
then told him that there are two kinds of poems. There is the kind you write; there is the
kind you talk about in bars. Both kinds have value and both are poems; but it's fatal to
confuse them.

In the Seventh Saint, many years later, it had struck him that the difference between himself and
Shakespeare wasn't talent - not especially - but nerve. The capacity not to be frightened by his
largest and most potent conceptions, to simply (simply!) sit down and execute them. The dreadful
lassitude he felt when something really large and multifarious came suddenly clear to him,
something Lear-sized yet sonnet-precise. If only they didn't rush on him whole, all at once,
massive and perfect, leaving him frightened and nerveless at the prospect of articulating
them word by scene by page. He would try to believe they were of the kind told in bars,
not the kind to be written, though there was no way to be sure of this except to attempt
the writing; he would raise a finger (the novelist in the bar mirror raising the obverse finger)
and push forward his change. Wailing like a neglected ghost, the vast notion would beat
its wings into the void.

Sometimes it would pursue him for days and years as he fled desperately. Sometimes he would
turn to face it, and do battle. Once, twice, he had been victorious, objectively at least. Out of an
immense concatenation of feeling, thought, word, transcendent meaning had come his first novel,
a slim, pageant of a book, tombstone for his slain conception. A publisher had taken it, gingerly;
had slipped it quietly into the deep pool of spring releases, where it sank without a ripple, and
where he supposes it lies still, its calm Bodoni gone long since green. A second, just as slim but
more lurid, nightmarish even, about imaginary murders in an imaginary exotic locale, had been
sold for a movie, though the movie had never been made. He felt guilt for the producer's failure
(which perhaps the producer didn't feel), having known the book could not be filmed; he had
made a large sum, enough to finance years of this kind of thing, on a book whose first printing
was largely returned.”

“Novelty and Security: the security of novelty, the novelty of security. Always the full thing,
the whole subject, the true subject, stood just behind the one you found yourself contemplating.
The trick, but it wasn't a trick, was to take up at once the thing you saw and the reason you saw
it as well; to always bite off more than you could chew, and then chew it. If it were self-indulgence
for him to cut and polish his semiprecious memories, and yet seem like danger, like a struggle he
was unfit for, then self-indulgence was a potent force, he must examine it, he must reckon with it.”