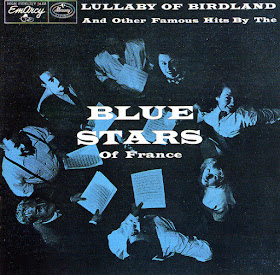 
She moved to Paris in 1952 and formed a vocal group, the Blue Stars (1952–1955)
The four-man, four-woman act (whose number varied in later years) recorded
"Lullaby of Birdland" in 1955. Group singer Bob Dorough contributed a nifty,
two-note piano solo (with flourishes) on the track and Dearie's vocal contribution
is discernible within the skillful eight-member vocal performance.
The recording was given a big band treatment by arranger Michel Legrand
(later known in the U.S. for "The Windmills of Your Mind" from The
Thomas Crown Affair and the original film score of Summer of '42,
both Academy Award winners).

The Blue Stars of France