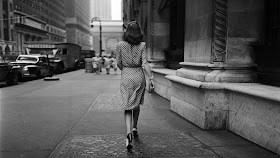 “I walk because it confers- or restores- a feeling of placeness...I walk because, somehow, it's like
reading. You're privy to these lives and conversations that have nothing to do with yours, but you
can eavesdrop on them. Sometimes it's overcrowded; sometimes the voices are too loud. But there
is always companionship. You are not alone. You walk in the city side by side with the living and
the dead.”
“We all have our own signals we're listening for, or trying not to hear.”
“We want to make choices, and have some agency in getting lost, and getting found.
We want to challenge the city, and decipher it, and flourish within its parameters.”
Lauren Elkin, Flâneuse: Women Walk the City
in Paris, New York, Tokyo, Venice and London, 2016 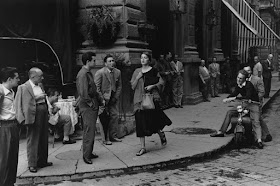 “Slow down: it’s the only way to guarantee your immortality.”
“Walking it mapping with your feet. It helps you piece a city together, connecting up neighborhoods
that might otherwise have remained discrete entities, different planets bound to each other,
sustained yet remote. I like seeing how in fact they blend into one another, I like noticing
the boundaries between them. Walking helps me feel at home.”
“Environments inhabit us,' Varda said. These places that we take into ourselves and make part
of us, so that we made of all the places we've loved, or of all the places where we've changed.
We pick up bits and pieces from each of them, and hold them all in ourselves.”
Lauren Elkin, Flâneuse: Women Walk the City
in Paris, New York, Tokyo, Venice and London, 2016 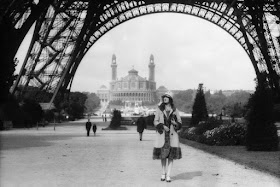 A woman strolls past the Trocadero and Eiffel Tower,  Paris, 1920s

“The streets of Paris had a way of making me stop in my tracks, my heart suspended. They seemed
saturated with presence, even if there was no one there but me. These were places where something
could happen, or had happened, or both; a feeling I could never have had at home in New York,
where life is inflected with the future tense.”
“Living between cities, we are abandoned by them as much as they are by us,
because if they gave us all we needed, we wouldn't have to leave.”
Lauren Elkin, Flâneuse: Women Walk the City
in Paris, New York, Tokyo, Venice and London, 2016 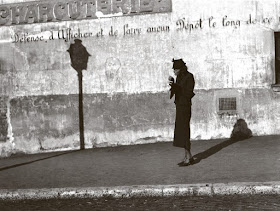 “We get to know our cities on hoot, and when we leave, the topography shifts. We're no longer
as surefooted. But maybe that's a good thing. It's just a question of looking, and of not hoping
to see something else when we do. Maybe it's good to keep some distance from the things
we know well, to always be slightly out of sync with them, not to pretend mastery. Beneath
the cities we don't recognize are stacked all the cities we do.” 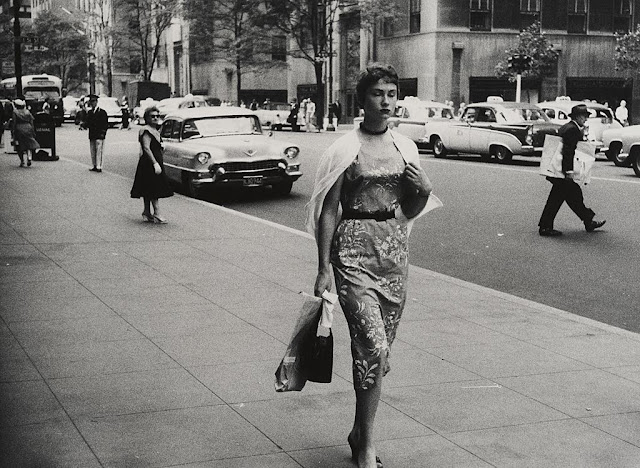 Garry Winogrand, New York, 1950s
“Why do I walk? I walk because I like it. I like the rhythm of it, my shadow always a little ahead
of me on the pavement. I like being able to stop when I like, to lean against a building and make
a note in my journal, or read an email, or send a text message, and for the world to stop while I
do it. Walking, paradoxically, allows for the possibility of stillness. Walking is mapping with
your feet. It helps you piece a city together, connecting up neighbourhoods that might otherwise
have remained discrete entities, different planets bound to each other, sustained yet remote."
"Once I began to look for the flâneuse, I spotted her everywhere."
Lauren Elkin, Flâneuse: Women Walk the City
in Paris, New York, Tokyo, Venice and London, 2016 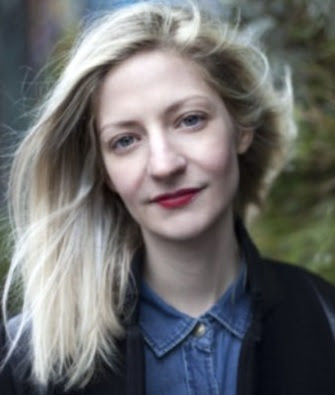 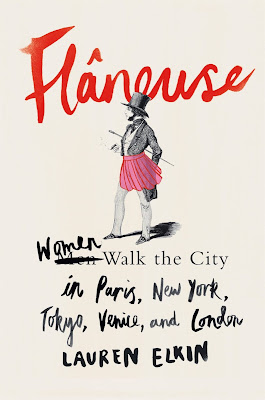 Lauren Elkin                                         Flâneuse: Women Walk the City, 2016
Flâneuse [flanne-euhze], noun, from the French. Feminine form of flâneur [flanne-euhr],
an idler, a dawdling observer, usually found in cities.
That is an imaginary definition. Most French dictionaries don’t even include the word. The 1905
Littré does make an allowance for ‘flâneur, -euse.’ Qui flâne. But the Dictionnaire Vivant de
la Langue Française defines it, believe it or not, as a kind of lounge chair.
Is that some kind of joke? The only kind of curious idling a woman does is laying down? 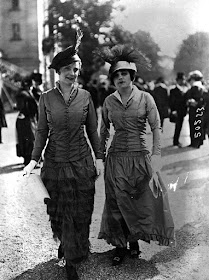 Strolling through Paris in 1914
The first mention of flâneur occurred in 1585. At the time, it was defined,
in genderless terms, as “a person who wanders.” Elkin suggests that the
concept was not gendered until 1806 at the earliest.
Aslant to the Flâneur: A Conversation with Lauren Elkin
>
Also:
Tangier / Samuel Beckett on Holidays | Photos by François-Marie Banier, 1978
Κοινή χρήση