“French Polynesia embraces a vast ocean area strewn with faraway outer islands, each with
a mystique of its own. The 118 islands and atolls are scattered over an expanse of water 18
times the size of California, though in dry land terms the territory is only slightly bigger than
Rhode Island. The distance from one end of the island groups to another is four times further
than from San Francisco to Los Angeles. Every oceanic island type is represented in these
sprawling archipelagoes positioned midway between California and New Zealand. The coral
atolls of the Tuamotus are so low they’re threatened by rising sea levels, while volcanic Tahiti
soars to 2,241 meters. Bora Bora and Maupiti, also high volcanic islands, rise from the lagoons
of what would otherwise be atolls.” 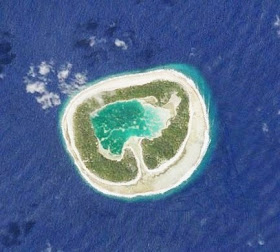 Pinaki,'Te Kiekie or Artomix is a small atoll of the Tuamotu group in French Polynesia

An atoll is a ring-shaped coral reef including a coral rim that encircles a lagoon partially
or completely. There may be coral islands or cays on the rim. The coral of the atoll often
sits atop the rim of an extinct seamount or volcano which has eroded or subsided partially
beneath the water. The lagoon forms over the volcanic crater or caldera while the higher
rim remains above water(s) or at shallow depths that permit the coral to grow and
form the reefs.