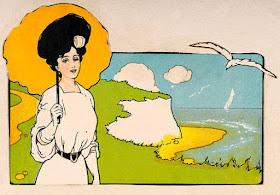 A vintage postcard illustration featuring a stylish lady walking along a footpath overlooking
the White Cliffs of Dover, 1900


The cliffs are part of the coastline of Kent in England. On a clear day they are visible from
the French coast. The chalk cliffs of the Alabaster Coast of Normandy in France are part of
the same geological system. 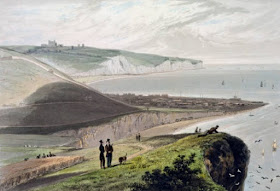 Dover, from Shakespeare's Cliff, Kent, 1829
From A Voyage Around Great Britain Undertaken between the years 1814-1825
by William Daniell, 1829 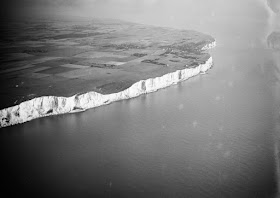 
The most famous reference in English literature to the White Cliffs is in
Shakespeare's King Lear, Act IV, Scene I.
Edgar persuades the blinded Earl of Gloucester that he is at the edge of a cliff in Dover.
Gloucester says
"There is cliff, whose high and bending head looks fearfully in the confined deep:
Bring me to the very brim of it." Edgar fools the Gloucester into thinking he is at the
cliff edge and describes the scene: "Here's the place! - stand still - how fearful/
And dizzy 'tis, to cast one's eye so low ... half way down/Hangs one that gathers
samphire: dreadful trade!/Methinks he seems no bigger than his head." 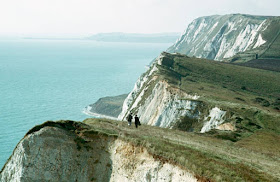 
"The sea is calm tonight,
The tide is full, the moon lies fair
Upon the straits:- on the French coast, the light
Gleams, and is gone: the cliffs of England stand,
Glimmering and vast, out in the tranquil bay." 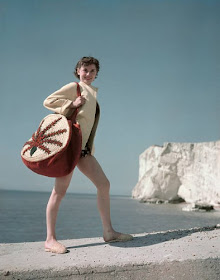 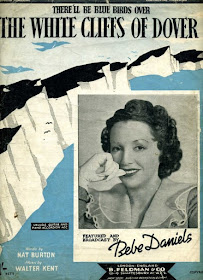 Vera Lynn's 1942 recording of the song "(There'll Be Bluebirds Over) The White Cliffs of Dover"
was one of the most popular songs of World War II.
Words by Nat Burton; Music by Walter Kent