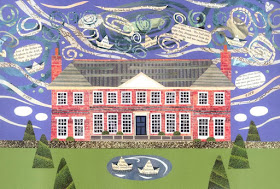 Shelley, Field Place, Sussex and a Storm at Sea

The birthplace of the Romantic poet Percy Bysshe Shelley. Field Place, Warnham, near
Horsham in West Sussex, is the impressive building in which Shelley was born in 1792.

The image shows a foreshadowing of the poet's end, drowned in a storm at sea, thirty years later. 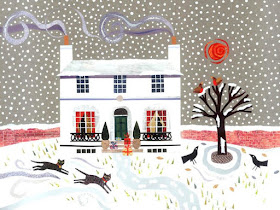 A collage portrait of Wentworth Place (now Keats House) where Romantic poet
John Keats lived from 1818 to 1820. It was here he wrote some of his greatest poetry
and where he fell in love with and became engaged to the girl next door, Fanny Brawne. 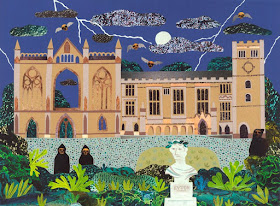 The family seat of the Byrons in Nottinghamshire, seen here on a dark and stormy night.
The Romantic poet Lord Byron inherited the ruined property in 1798. Said to be one
of the most haunted buildings in England, the Abbey datesback to the thirteenth century. 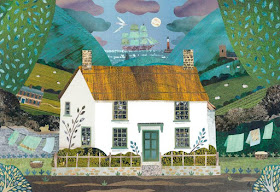 Samuel Taylor Coleridge, Mine Own Countree

English Romantic poet Samuel Taylor Coleridge wrote some of his best-known work in
this humble cottage where he lived for three years from 1797.
The title of this picture comes from a line in The Rime of the Ancient Mariner and at
the top you can see the mariner's ship and the albatross. 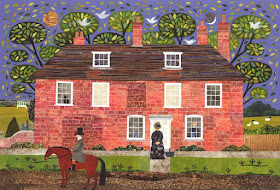 Jane Austen lived at Chawton Cottage with her mother, sister Cassandra and best friend
Martha Lloyd from 1809 to 1817. Here she wrote and revised some of her best loved
novels - despite interruptions from callers! 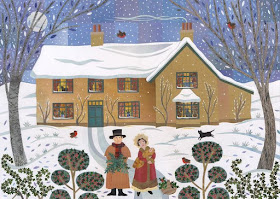 George Eliot, The Holly and the Ivy
George Eliot's birthplace in Nuneaton, England 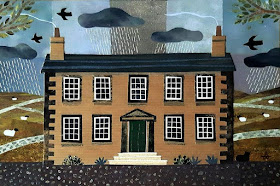 The home of the Brontë Sisters in Haworth, Yorkshire. 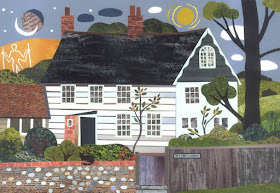 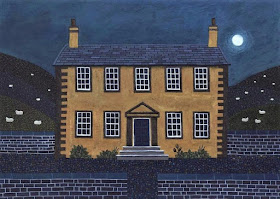 Brontë Sisters, Silent is the House

"It is a nocturnal take on the famous parsonage in Haworth that was home to the remarkable Brontë
sisters and their siblings, all of whom predeceased their father, the Rev Patrick Brontë, who lived
on until 1861." 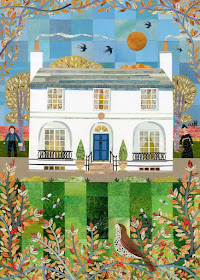 It was here Keats wrote some of his best-loved poems and fell in love with the girl
literally next door, Fanny Brawne, who with her family occupied the right-hand side
of the house. During their brief and tragically short engagement he wrote Fanny many
letters, in some of which he mentioned "their" thrush, singing in the garden.

It was in autumn that the dying Keats left Wentworth Place, bound for Italy, in search
of a kinder climate. It was also the season which inspired him to write what is considered
to be one of the most perfect poems in the English language, To Autumn.