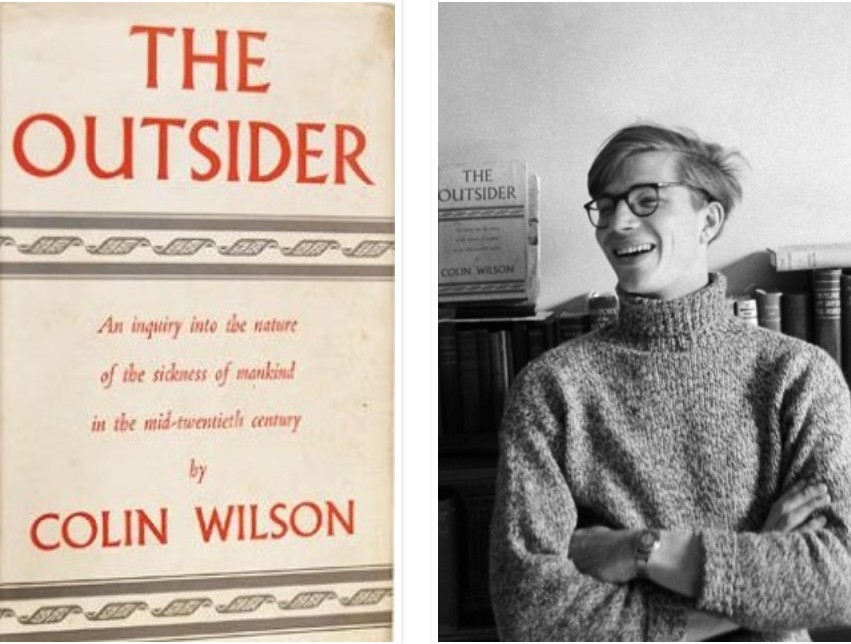 “The outsider is not sure who he is. He has found an “I”, but it is not his true “I”.’
His main business is to find his way back to himself.”

“In his embryonic form, as the Outsider, he does not know himself well enough to understand the
driving force behind his feelings. That is why his chief concern is with thinking, not with doing.”

“Ask the Outsider what he ultimately wants,and he will admit he doesn't know.Why?
Because he wants it instinctively,and it is not always possible to tell what your instincts are driving towards.”

“Some are perfectly satisfied with what they have; they eat, drink, impregnate their wives, and take
life as it comes. Others can never forget that they are being cheated; that life tempts them to struggle
by offering them the essence of sex, of beauty, of success; and that she always seems to pay in counterfeit money.”

“The Outsider is always unhappy, but he is the agent that ensures happiness for millions of ‘Insiders’.”

“These men are in prison: that is the Outsider’s verdict. They are quite contented in prison—caged
animals who have never known freedom; but it is prison all the same. And the Outsider? He is in
prison too: nearly every Outsider in this book has told us so in a different language; but he knows
it. His desire is to escape. But a prison-break is not an easy matter; you must know all about your
prison, otherwise you might spend years in tunnelling, like the Abbe in The Count of Monte Cristo,
and only find yourself in the next cell.”

“He alone is aware of the truth, and if all men were aware of it, there would be an end of life. In the
country of the blind, the one-eyed man is king. But his kingship is kingship over nothing. It brings
no powers and privileges, only loss of faith and exhaustion of the power to act. Its world is a world
without values.”

“Man is as much a slave to his immediate surroundings now as he was when he lived in tree-huts.
Give him the highest, the most exciting thoughts about man's place in the universe, the meaning of
history; they can all be snuffed out in a moment if he wants his dinner, or feels irritated by a child
squalling on a bus. He is bound by pettiness.”

“Most men have nothing in their heads but their physical needs; put them on a desert island with
nothing to occupy their minds and they would go insane. They lack real motive. The curse of
civilization is boredom.”

“The outsider, Haller says, is a self-divided man; being self-divided, his chief desire is to be unified.
He is selfish as a man with a lifelong raging toothache.”

“Cézanne's painting is strictly painting, and its value is immense; but Van Gogh's painting has the
Outsider's characteristic: it is a laboratory refuse of a man who treated his own life as an experiment
in living; it faithfully records moods and developments of vision on the manner of a Bildungsroman.”

“The Outsider’s case against society is very clear. All men and women have these dangerous,
unnamable impulses, yet they keep up a pretense, to themselves, to others; their respectability,
their philosophy, their religion, are all attempts to gloss over, to make civilized and rational
something that is savage, unorganized, irrational. He is an Outsider because he stands for truth.”

“The exploration of oneself is usually also an exploration of the world at large, of other writers,
a process of comparison with oneself with others, discoveries of kinships, gradual illumination
of one's own potentialities.”

“Freedom posits free-will; that is self-evident. But Will can only operate when there is first a motive.
No motive, no willing. But motive is a matter of belief; you would not want to do anything unless
you believed it possible and meaningful. And belief must be belief in the existence of something;
that is to say, it concerns what is real. So ultimately, freedom depends upon the real. The Outsider’s
sense of unreality cuts off his freedom at the root. It is as impossible to exercise freedom in an unreal
world as it is to jump while you are falling.”

“There is in Shaw, as in Gurdjieff and Nietzsche, a recognition of the immense effort of Will that
is necessary to express even a little freedom, that places them beside Pascal and St. Augustine as
religious thinkers. Their view is saved from pessimism only by its mystical recognition of the
possibilities of pure Will, freed from the entanglements of automatism”

“The civilized man and the wolf-man live at enmity most of the time, and it would seem that Harry
Haller is bound to spend his days divided by their squabbling. But sometimes, as in the tavern, they
make peace, and then a strange state ensues; for Harry finds that a combination of the two makes him
akin to the gods. In these moments of vision, he is no longer envious of the bourgeois who finds life
so straightforward, for his own conflicts are present in the bourgeois, on a much smaller scale. He, as
self-realizer, has deliberately cultivated his two opposing natures until the conflict threatens to tear
him in two, because he knows that when he has achieved the secret of permanently reconciling them,
he will live at a level of intensity unknown to the bourgeois. His suffering is not a mark of his
inferiority, even though it may render him less fit for survival than the bourgeois; unreconciled,
it is the sign of his greatness; reconciled, it is manifested as ‘more abundant life’ that makes the
Outsider’s superiority over other types of men unquestionable. When the Outsider becomes aware
of his strength, he is unified and happy. Haller”

“It was an extremely hard and discouraging business, for I knew no one whose interests overlapped
with mine. I married when I was nineteen, and a wife and child added to the problems. But at least
it meant that I got used to working completely and totally alone, and not expecting encouragement.
Later on, reviewers and critics were outraged by what one of them called “his stupefying assurance
about his own genius.” But it would have been impossible to go on working without some conviction
of genius—at least, of certainty about the importance of what I was doing, and the belief that it wouldn’t
matter if no other human being ever came to share this certainty. The feeling of alienation had to be
totally accepted. Luckily, I’ve always had a fairly cheerful temperament, not much given to self-pity.
So I went on working, reading and writing in my total vacuum, without contact with any other writer
or thinker.”

“It seemed to me that a solution must be found. Here, my natural optimism was to my advantage.
For when I read Sartre or Camus or Graham Greene, I experienced a temperamental rejection of
their pessimism. I suspected that their ultimate picture might be distorted by a certain self-pity or
lack of discipline—or, in the case of Greene, by a certain congenital lack of vitality. I suspected
that if the problem left them defeated, it was because they had not attacked it hard enough.”

“Never, until these last few days, had I understood the meaning of existence. I was like the others…
I said with them: The ocean is green, that white speck up there is a seagull, but I didn’t feel that
it existed…And then suddenly existence had unveiled itself.”

“The vitality of the ordinary members of society is dependent on its Outsiders. Many Outsiders unify
themselves, realize themselves as poets or saints. Others remain tragically divided and unproductive,
but even they supply soul-energy to society; it is their strenuousness that purifies thought and prevents
the bourgeois world from foundering under its own dead-weight; they are society’s spiritual dynamos.”

“But the problem for the individual always will be the opposite of this, the conscious striving not to
limit the amount of experience seen and touched; the intolerable struggle to expose the sensitive
areas of being to what may possibly hurt them; the attempt to see as a whole, although the instinct
of self-preservation fights against the pain of the internal widening, and all the impulses of spiritual
laziness build into waves of sleep with every new effort. The individual begins that long effort as
an Outsider; he may finish it as a saint.” 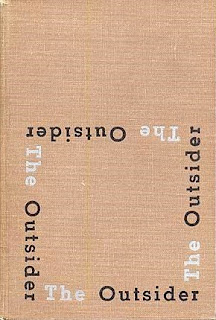 On Christmas Day, 1954, alone in his room, Wilson sat down on his bed and began
to write in his journal. He described his feelings as follows:

It struck me that I was in the position of so many of my favourite characters in fiction:
Dostoevsky's Raskolnikov, Rilke's Malte Laurids Brigge, the young writer in Hamsun's Hunger:
alone in my room, feeling totally cut off from the rest of society. It was not a position I relished...
Yet an inner compulsion had forced me into this position of isolation. I began writing about it
in my journal, trying to pin it down. And then, quite suddenly, I saw that I had the makings of
a book. I turned to the back of my journal and wrote at the head of the page: 'Notes for a book
The Outsider in Literature'...