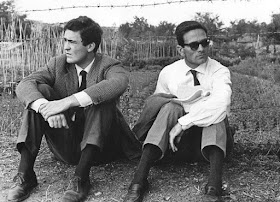 Bernardo Bertolucci and Pier Paolo Pasolini near Rome during
the filming of Pasolini’s first film ‘Accattone’, 1961

"I found out that Pasolini taught me a lot. It was, especially, the kind of respect that he had for reality.
He had kind of epiphanies in his movies, like when a moment becomes full of grace, and it is like as
if it was the most important moment in the life of a character. That's what I learned from Pier Paolo." 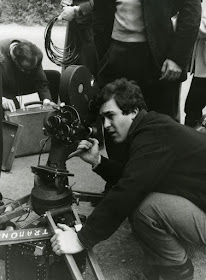 It was the first time I stepped into a movie set. I said to him, "I've never done movies, how can I help
you?" He said, "Me too, it's the first time for both." In a way, knowing how close he was, I felt he
was very generous. Since we were living in the same building, every morning we were leaving
together to the set. I was going with him in his car. I was still living with my parents. I was 20 and
I didn't have a car. He was driving, and I remember this drive to the set, which was the other side of
Rome. It was very silent, and suddenly he was starting to tell me what he dreamt. In a way, in a very
indirect way, his dreams were becoming part of what he was doing. But he was very strict about
what he wanted to do, and very precise. He had decided that his model was the icons of 14th-century
Tuscan art, from Giotto [di Bondone] to the Sienese, these bunch of fantastic painters in Siena, like
Simone Martini, et cetera. Which means, at the end, this kind of beatific vision, kind of sacred. Like
if his actor was a saint. The camera was always still. In parts where the camera was moving, he
would follow them always in order to keep the same distance. The first few weeks were close-ups,
and always a still camera. That's why doing a movie from a story for Pier Paolo, which was meant,
when we wrote it, to be in the style of Pier Paolo, when they asked me to do it, I felt like going
completely against the style of [Pasolini's debut film] Accatone. I wanted to find my own style, which
was the opposite. The shots in Accatone are so still, and the shots in La Commare Secca are
constantly moving. There is a camera which is moving all the time. 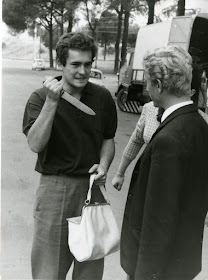 Bertolucci on the set of "La Commare Secca", 1962
La commare secca is the 1962 Italian film written and directed by Bernardo Bertolucci, based on a
short story by Pier Paolo Pasolini. It was Bertolucci's directorial debut at age 21.

La commare secca is a murder mystery that resembles Akira Kurosawa’s Rashomon (1950), relying
on the recollections of witnesses—in this case, various young men who may have been involved in
the death of a prostitute—to tell the story. 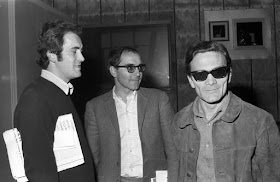 Bernardo Bertolucci, Jean-Luc Godard and Pier Paolo Pasolini at a meeting for the film Love and Anger, 1969

"The movies I like are always movies where cinema is reinvented like if it was
the beginning of cinema."