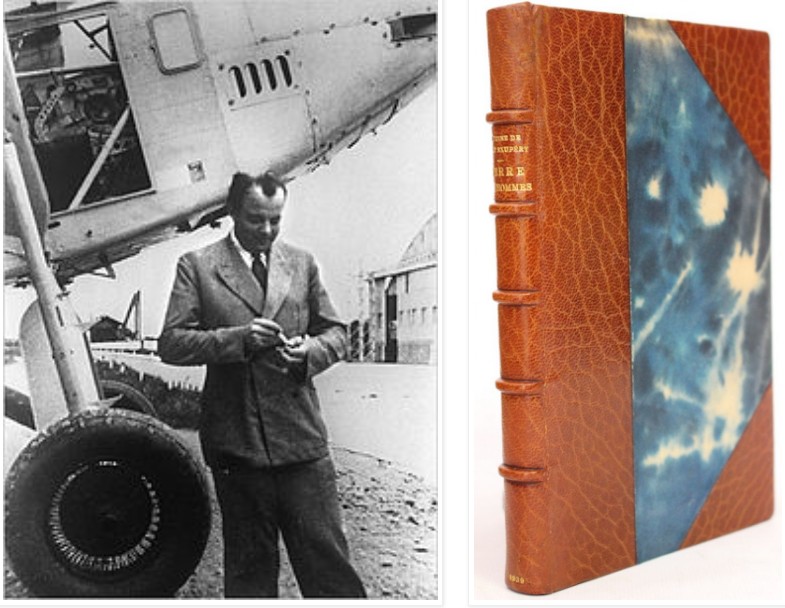 
“What saves a man is to take a step. Then another step.
It is always the same step, but you have to take it.” 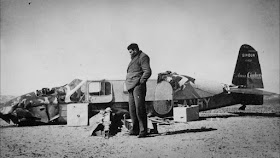 Antoine de Saint-Exupéry stands next to the wreck of his Caudron C.630 Simoun, F-ANRY, in the Sahara, 1935

On 29 December 1935, while flying his red and white Caudron C.630 Simoun, F-ANRY, in a race
from Paris, France, to Sài Gòn, French Indo-China, Saint-Exupéry crashed in the Sahara desert.
He and his mechanic, André Prévost, were marooned without food or water. They wandered
aimlessly for four days and were near death when they were rescued by a Bedouin tribesman.
Saint-Exupéry wrote about the experience in Wind, Sand and Stars. 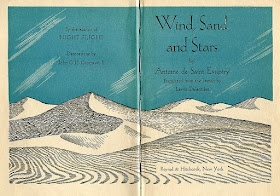 
“To be a man is, precisely, to be responsible. It is to feel shame at the sight of what seems
to be unmerited misery. It is to take pride in a victory won by one's comrades. It is to feel,
when setting one's stone, that one is contributing to the building of the world.”


“It is in the compelling zest of high adventure and of victory, and in creative action, that
man finds his supreme joys.”


“But you want to remember that below the sea of clouds lies eternity.”


“Love is not just looking at each other, it's looking in the same direction.”


"To grasp the meaning of the world of today we use a language created to express the world
of yesterday. The life of the past seems to us nearer our true natures, but only for the reason
that it is nearer our language.
Every step on the road of progress takes us farther from habits which, as the life of man goes,
we had only recently begun to acquire. We are in truth emigrants who have not founded our
homeland." 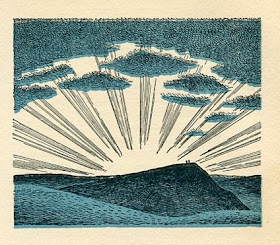 “When I opened my eyes I saw nothing but the pool of nocturnal sky, for I was lying on my
back with out-stretched arms, face to face with that hatchery of stars. Only half awake, still
unaware that those depths were sky, having no roof between those depths and me, no branches
to screen them, no root to cling to, I was seized with vertigo and felt myself as if flung forth
and plunging downward like a diver.”

“Behind all seen things lies something vaster; everything is but a path, a portal or a window
opening on something other than iteself. ”

“I looked about me. Luminous points glowed in the darkness. Cigarettes punctuated the humble
meditations of worn old clerks. I heard them talking to one another in murmurs and whispers.
They talked about illness, money, shabby domestic cares. And suddenly I had a vision of the face
of destiny. Old bureaucrat, my comrade, it is not you who are to blame. No one ever helped you
to escape. You, like a termite, built your peace by blocking up with cement every chink and
cranny through which the light might pierce. You rolled yourself up into a ball in your genteel
security, in routine, in the stifling conventions of provincial life, raising a modest rampart against
the winds and the tides and the stars. You have chosen not to be perturbed by great problems,
having trouble enough to forget your own fate as a man. You are not the dweller upon an errant
planet and do not ask yourself questions to which there are no answers. Nobody grasped you by
the shoulder while there was still time. Now the clay of which you were shaped has dried and
hardened, and naught in you will ever awaken the sleeping musician, the poet, the astronomer
that possibly inhabited you in the beginning.” 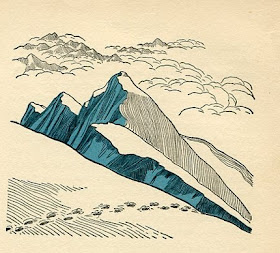 “Alone within the vast tribunal that is the stormy sky, the pilot is in contention for his mailbags
with three elemental divinities: mountain, sea and storm.”


“If he shrugs his shoulders, it is because he is no fool. He knows that once men are caught up
in an event they cease to be afraid. Only the unknown frightens men. But once a man has
faced the unknown, that terror becomes the known.”

“Nothing, in truth, can ever replace a lost companion. Old comrades cannot be manufactured.
There is nothing that can equal the treasure of so many shared memories, so many bad times
endured together, so many quarrels, reconciliations, heartfelt impulses. Friendships like that
cannot be reconstructed. If you plant an oak, you will hope in vain to sit soon under its shade.

For such is life. We grow rich as we plant through the early years, but then come the years when
time undoes our work and cuts down our trees. One by one our comrades deprive us of their
shade, and within our mourning we always feel now the secret grief of growing old.

If I search among my memories for those whose taste is lasting, if I write the balance sheet of the
moments that truly counted, I surely find those that no fortune could have bought me. You cannot
buy the friendship of a companion bound to you forever by ordeals endured together.” 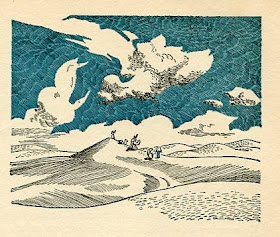 “You’ll be bothered from time to time by storms, fog, snow. When you are, think to
yourself, ‘What they could do, I can do.”


“The first stars tremble as if shimmering in green water. Hours must pass before their glimmer
hardens into the frozen glitter of diamonds. I shall have a long wait before I witness the soundless
frolic of the shooting stars. In the profound darkness of certain nights I have seen the sky streaked
with so many trailing sparks that it seemed to me a great gale must be blowing through the outer
heavens. ”


“I am not talking about living dangerously. Such words are meaningless to me. The toreador
does not stir me to enthusiasm. It is not danger I love. I know what I love. It is life.”

“What is going on inside me I cannot tell. In the sky a thousand stars are magnetized, and I lie glued
by the swing of the planet to the sand. A different weight brings me back to myself. I feel the weight
of my body drawing me towards so many things. My dreams are more real than these dunes, than
that moon, than these presences. My civilization is an empire more imperious than this empire. The
marvel of a house is not that it shelters or warms a man, nor that its walls belong to him. It is that it
leaves its trace on the language. Let it remain a sign. Let it form, deep in the heart, that obscure range
from which, as waters from a spring, are born our dreams.” 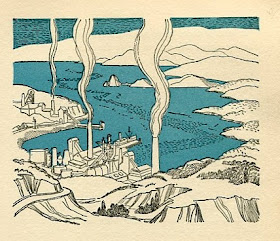 "What he had yearned to embrace was not the flesh but a down spirit, a spark, the impalpable
angel that inhabits the flesh.”

“Sitting in the flickering light of the candles on this kerchief of sand, on this village square, we
waited in the night. We were waiting for the rescuing dawn - or for the Moors. Something,
I know not what, lent this night a savor of Christmas. We told stories, we joked, we sang songs.
In the air there was that slight fever that reigns over a gaily prepared feast. And yet we were
infinitely poor. Wind, sand, and stars. The austerity of Trappists. But on this badly lighted cloth,
a handful of men who possessed nothing in the world but their memories were sharing invisible
riches. ” 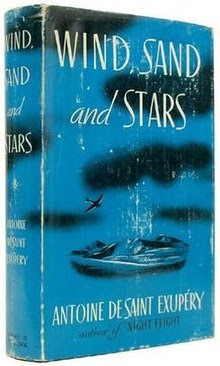 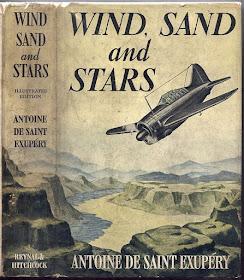 “I had thought myself lost, had touched the very bottom of despair; and then, when the spirit of
renunciation had filled me, I had known peace. I know now what I was not conscious of at the
time—that in such an hour a man feels that he has finally found himself and has become his own
friend. An essential inner need has been satisfied, and against that satisfaction, that self-fulfilment,
no external power can prevail. Bonnafous, I imagine, he who spent: his life racing before the wind,
was acquainted with this serenity of spirit. Guillaumet, too, in his snows. Never shall I forget that,
lying buried to the chin in sand, strangled slowly to death by thirst, my heart was infinitely warm
beneath the desert stars. What can men do to make known to themselves this sense of deliverance?
Everything about mankind is paradox. He who strives and conquers grows soft. The magnanimous
man grown rich becomes mean. The creative artist for whom everything is made easy nods. Every
doctrine swears that it can breed men, but none can tell us in advance what sort of men it will breed.
Men are not cattle to be fattened for market. In the scales of life an indigent Newton weighs more
than a parcel of prosperous nonentities. All of us have had the experience of a sudden joy that came
when nothing in the world had forewarned us of its coming—a joy so thrilling that if it was born of
misery we remembered even the misery with tenderness.”

“You, Bedouin of Libya who saved our lives, though you will dwell forever in my memory yet I
shall never be able to recapture your features. You are Humanity and your face comes into my
mind simply as man incarnate. You, our beloved fellowman, did not know who we might be,
and yet you recognized us without fail. And I, in my turn, shall recognize you in the faces of
all mankind. You came towards me in an aureole of charity and magnanimity bearing the gift
of water. All my friends and all my enemies marched towards me in your person. It did not
seem to me that you were rescuing me: rather did it seem that you were forgiving me. And I
felt I had no enemy left in all the world.”

* Saint-Exupéry dedicated the book to his friend Henri Guillaumet of Aéropostale.


In America, Wind, Sand and Stars was hailed on the front page of The New York Times Book Review as "a beautiful book, and a brave book. and a book that should be read against the confusion of this world, if only that we may retain 'our pride in humanity and our excitement in this modern age." Launched with fanfare by Reynal & Hitchcock, it was reviewed as well on the June covers of The Saturday Review and the New York Herald Tribune Books section, and quickly became a best-seller. "To read it is to forget we are earthbound," raved the Atlantic reviewer, who like several American critics knew little of Saint-Exupéry but made of him a quick study, describing the book's "contrasting moods of loneliness and human warmth, of exhilaration and the merciless exposure of nerves and sanity." (Many of Saint-Exupéry's friends would have howled with laughter had they read the Herald Tribune review, in which Ben Ray Redman, noting the author's quibble that most men are half-asleep in their lives, wrote, "Antoine de Saint-Exupéry is awake and would awaken others.") In October, a month after war had been declared, Wind, Sand and Stars read just as well in London, where The Spectator's reviewer was struck by Saint-Exupéry's "God-like tolerance for the pettiness and folly of mankind." "He touches nothing which he does not illuminate," wrote the Times Literary Supplement's critic of this book of "visions and dreams," rarely described in any country as anything less than a "hymn," a "poem," an "adventure in prose," or a "rhapsody." The fan mail poured in, from such disparate admirers as Le Corbusier and King Leopold of Belgium.