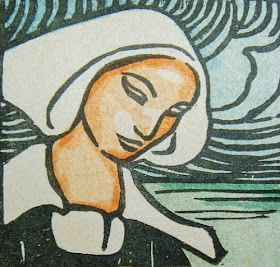 “The little white pieces / Fell in the mist like a flock of gulls.”

“It’s the sea,—a flat calm.—And the great tide / With a far-off roar has withdrawn.”

''The waves will soon come rumbling back in. / Can you hear the crabs scratching about in the dark?”

It’s life: listen, the living spring sings
The eternal song over the sticky earth
Of a sea god stretching his limbs nude and green
On the bed of the Morgue … and his big eyes are open. 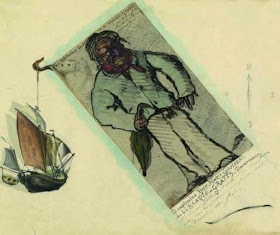 Sands of old bones - The sea draws
Last gasps: its swell bursting, sound on sound …
- To see the night through, the moon trawls
Pallid swamp, gulping fat worms down.

- Calm of the plague, kiln of fever …
The damned will o’ the wisp is languishing.
- Through fetid grass the lily-livered
Warlock of a hare is vanishing …

Of toads, small, melancholy
Succentors, with their bags of colic,
Poison the mushrooms, their stools.

Does anything not to do a thing.
Drifts nowhere and beyond; swashbuckler, yob,
Privateer, two-faced, on shipboard or shore job;
Lackey, freebooter, black, white, soldier – hired –
Hit-man, does anything and all required, […]

Sands of old bones – And the tide coughs
Up death-knells, kicking buckets of noisy spray…
– Pallid salt marsh where the moon scoffs
Fat worms to while the night away. 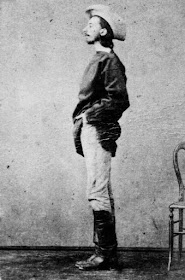 Tristan Corbiere disguised as a woman and as a sailor

– I found her – many springs, post me,
Many score years, score francs in fee,
Many holes burnt, much moonings blank
After – Still virgin and twenty… rank:
Colonel to the Commune – to be frank!

"I have the clearness of the moon / And for friends I have amorous vagabonds with no money."

“I have taken my hurdy-gurdy and my lyre, to try / to call you back”

“in concubinage with the Muses.”