A Letter from Charlie Parker to his wife Chan Parker 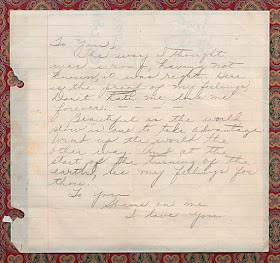 To you;
The way I thought was wrong, having not known, it was right. Here is the proof of my feelings,
Don’t hate me, love me forever: —
Beautiful is the world, slow is one to take advantage. Wind up the world the other way.
And at the start of the turning of the earth, lie my feelings for thou. 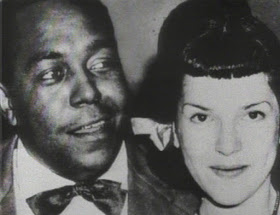 
This undated letter was sent by legendary jazz saxophonist Charlie ‘Bird’ Parker to his common-law-wife Chan Richardson (also known as Parker). Born Beverly Dolores Berg, a name she disliked, Chan changed it as soon as she was able. By the time she met Parker, in 1945, Chan’s unofficial title was ‘Queen of 52nd Street’, the place associated most wth jazz in the 1940s and 50s. Her extraordinary beauty, wit and intelligence meant that the 18-year-old Chan could have had her pick of men. In fact, when she met the 23-year-old Parker, she was already married, as was the musician. Despite this, their friendship quickly developed into love. Chan and her young daughter moved in with Parker in 1950. Ebony featured the couple on the cover of the magazine, a progressive act considering that they were an interracial couple at a time when society largely disapproved of the public expression of such love.
Parker’s own drug abuse and the very tragic death of the Parkers’ three-year-old daughter, Pree, in 1954, brought further strain to their relationship and they split up. A year later, Parker was dead, but this rather lovely letter shows the power of Parker’s love for his Chan.
Chan later wrote a memoir about her relationship with the great musician. She described Parker’s life as ‘a joyous thing. He lived it fully, loved his kids, music, movies. Simple things. Bird liked simple things. He was the strongest man I ever met in my life.’ (.) 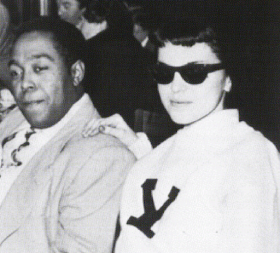