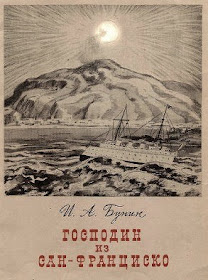 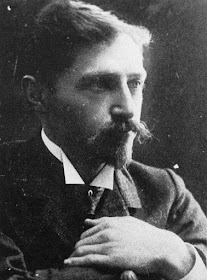 
“The middle of the 'Atlantis' the warm, luxurious cabins,dining-rooms, halls, shed light and joy, buzzed with the chatter of an elegant crowd, was fragrant with fresh flowers, and quivered with the sounds of a string orchestra. And again amidst that crowd, amidst the brilliance of lights, silks, diamonds, and bare feminine shoulders, a slim and supple pair of hired lovers painfully writhed and at moments convulsively clashed. A sinfully discreet, pretty girl with lowered lashes and hair innocently dressed, and a tallish young man with black hair looking as if it were glued on, pale with powder, and wearing the most elegant patent-leather shoes and a narrow, long-tailed dress coat, a beau resembling an enormous leech. And no one knew that this couple had long since grown weary of shamly tormenting themselves with their beatific love-tortures, to the sound of bawdy-sad music ; nor did any one know of that thing which lay deep, deep below at the very bottom of the dark hold, near the gloomy and sultry bowels of the ship that was so gravely overcoming the darkness, the ocean, the blizzard.”

''As the gloomy and sultry depths of the inferno, as the ninth circle, was the submerged womb of the steamer, where gigantic furnaces roared and dully giggled, devouring with their red-hot maws mountains of coal cast hoarsely in by men naked to the waist, bathed in their own corrosive dirty sweat, and lurid with the purple-red reflection of flame. But in the refreshment bar men jauntily put their feet up on the tables, showing their patent-leather pumps, and sipped cognac or other liqueurs, and swam in waves of fragrant smoke as they chatted in well-bred manner.'' 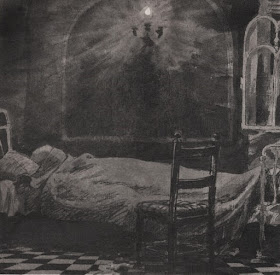 “Having shaved, washed, and dexterously arranged several artificial teeth, standing in front of the mirror, he moistened his silver-mounted brushes and plastered the remains of his thick pearly hair on his swarthy yellow skull. He drew on to his strong old body, with its abdomen protuberant from excessive good living, his cream-colored silk underwear, put black silk socks and patent-leather slippers on his flat-footed feet. He put sleeve-links in the shining cuffs of his snow-white shirt, and bending forward so that his shirt front bulged out, he arranged his trousers that were pulled up high by his silk braces, and began to torture himself, putting his collar-stud through the stiff collar. The floor was still rocking beneath him, the tips of his fingers hurt, the stud at moments pinched the flabby skin in the recess under his Adam's apple, but he persisted, and at last, with eyes all strained and face dove-blue from the over-tight collar that enclosed his throat, he finished the business and sat down exhausted in front of the pier glass, which reflected the whole of him, and repeated him in all the other mirrors.

" It is awful ! " he muttered, dropping his strong, bald head, but without trying to understand or to know what was awful. Then, with habitual careful attention examining his gouty-jointed short fingers and large, convex, almond-shaped finger-nails, he repeated : " It is awful. . . .”

“What did the Gentleman from San Francisco think and feel on that evening forever memorable to him? It must be said frankly: absolutely nothing exceptional. The trouble is that everything on this earth appears too simple. Even had he felt anything deep in his heart, a premonition that something was going to happen, he would have imagined that it was not going to happen so soon, at least not at once.” 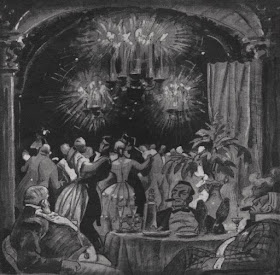 “The boats bumped against the side of the ship, the sailors and passengers shouted lustily, and somewhere a child, as if crushed to death, choked itself with screaming. The damp wind blew through the doors, and outside on the sea, from a reeling boat which showed the flag of the Hotel Royal, a fellow with guttural French exaggeration yelled unceasingly : '* Rrroy-al ! Hotel Rrroy-al ! " intending to lure passengers aboard his craft. Then the Gentleman from San Francisco, feeling, as he ought to have felt, quite an old man, thought with anguish and spite of all these " Royals," " Splendids,' 1 " Excelsiors," and of these greedy, good-for-nothing, garlic-stinking fellows called Italians. Once, during a halt, on opening his eyes and rising from the sofa he saw under the rocky cliff-curtain of the coast a heap of such miserable stone hovels, all musty and mouldy, stuck on top of one another by the very water, among the boats, and the rags of all sorts, tin cans and brown fishing-nets, and,remembering that this was the very Italy he had come to enjoy, he was seized with despair. . .”

“On the second and the third night there was again a ball -- this time in mid-ocean, during a furious storm sweeping over the ocean, which roared like a funeral mass and rolled up mountainous seas fringed with mourning silvery foam. The Devil, who from the rocks of Gibraltar, the stony gateway of two worlds, watched the ship vanish into night and storm, could hardly distinguish from behind the snow the innumerable fiery eyes of the ship. The Devil was as huge as a cliff, but the ship was even bigger, a many-storied, many-stacked giant, created by the arrogance of the New Man with his ancient heart.” 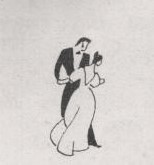