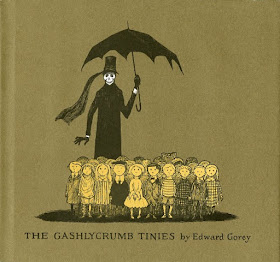 Edward Gorey, The Gashlycrumb Tinies or After the Outing, 1963

“A is for Amy who fell down the stairs.
B is for Basil assaulted by bears.
C is for Clara who wasted away.
D is for Desmond thrown out of a sleigh.
E is for Ernest who choked on a peach.
F is for Fanny sucked dry by a leech.

G is for George smothered under a rug.
H is for Hector done in by a thug.
I is for Ida who drowned in a lake.
J is for James who took lye by mistake.
K is for Kate who was struck with an axe.
L is for Leo who choked on some tacks.

M is for Maud who was swept out to sea.
N is for Neville who died of ennui.
O is for Olive run through with an awl.
P is for Prue trampled flat in a brawl.
Q is for Quentin who sank on a mire.
R is for Rhoda consumed by a fire.

S is for Susan who perished of fits.
T is for Titus who flew into bits.
U is for Una who slipped down a drain.
V is for Victor squashed under a train.
W is for Winnie embedded in ice.
X is for Xerxes devoured by mice.

Y is for Yorick whose head was bashed in.
Z is for Zillah who drank too much gin.”


''Reading Gorey is like losing your innocence -- except that, as the creepiness mounts, something else takes over.
His victims are too vacuous to inspire pity and terror, and his tone is too cool to make you wring your hands.
The only recourse is to laugh, and you do.''

Stephen Schiff,  Edward Gorey and the Tao of Nonsense, The New Yorker 1992