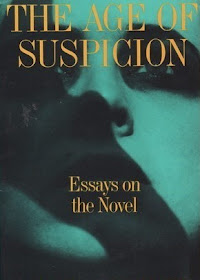 The Age of Suspicion: Essays on the Novel, Nathalie Sarraute

''Suspicion is one of the morbid reactions by which an organism defends itself and seeks another equilibrium.''

''Often it is an imaginary partner who emerges from our past experiences or from our day-dreams, and the scenes of love or combat between us, by virtue of their wealth of adventure, the freedom with which they unfold and what they reveal concerning our least apparent inner structure, can constitute very valuable fictional material.''

''It remains nonetheless true that the essential feature of these dramas is constituted by an actual partner.''

''But lacking actions, we can use words. And words possess the qualities needed to seize upon, protect and bring out into the open these subterranean movements that are at once impatient and afraid.''

''But it can also happen (...) that isolated, maladjusted, lonely individuals, morbidly attached to their childhood, withdrawn into themselves and cultivating a more or less conscious taste for a certain form of defeat, by giving in to an apparently useless obsession, succeed in digging up and laying bare a fragment of reality that is still unknown.''

''Their works, which seek to break away from all that is prescribed, conventional and dead, to turn toward what is free, sincere and alive, will necessarily, sooner or later, become ferments of emancipation and progress."

The Age of Suspicion: Essays on the Novel, Nathalie Sarraute, 1956

The Age of Suspicion (L'Ère du soupçon, 1956) served as a prime manifesto for the nouveau roman literary movement,
alongside Alain Robbe-Grillet's For a New Novel.

The Nouveau Roman  is a type of 1950s French novel that diverged from classical literary genres. Émile Henriot coined
the term in an article in the popular French newspaper Le Monde on May 22, 1957 to describe certain writers who
experimented with style in each novel, creating an essentially new style each time.