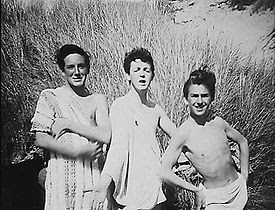 “One year, Paul and I decided to go hitchhiking. It’s something nobody would ever dream of these days. Firstly, you’d probably be mugged before you got through the Mersey Tunnel, and secondly everybody’s got cars and is already stuck in a traffic jam. I’d often gone with my family down South to Devon, to Exmouth, so Paul and I decided to go there first.


We didn’t have much money. We found bed-and-breakfast places to stay. We got to one town, and we were walking down a street and it was getting dark. We saw a woman and said, ‘Excuse me, do you know if there’s somewhere we could stay?’ She felt sorry for us and said, ‘My boy’s away, come and stay at my house.’ So she took us to hers - where we beat her, tied her up and robbed her of all her money! Only joking; she let us stay in her boy’s room and the next morning cooked us breakfast. She was really nice. I don’t know who she was - the Lone Ranger? 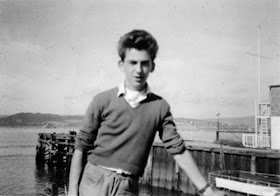 George Harrison in the summer of 1957


We continued along the South coast, towards Exmouth. Along the way we talked to a drunk in a pub who told us his name was Oxo Whitney. (He later appears in ‘A Spaniard in the Works.’ After we’d told John that story, he used the name. So much of John’s books is from funny things people told him.) Then we went on to Paignton. We still had hardly any money. We had a little stove, virtually just a tin with a lid. You poured a little meths into the bottom of it and it just about burned, not with any velocity. We had that, and little backpacks, and we’d stop at grocery shops. We’d buy Smedley’s spaghetti bolognese or spaghetti milanese. They were in striped tins: milanese was red stripes, bolognese was dark blue stripes. And Ambrosia creamed rice. We’d open a can, bend back the lid and hold the can over the stove to warm it up. That was what we lived on.

We got to Paignton with no money to spare so we slept on the beach for the night. Somewhere we’d met two Salvation Army girls and they stayed with us and kept us warm for a while. But later it became cold and damp, and I remember being thankful when we decided that was enough and got up in the morning and started walking again. We went up through North Devon and got a ferry boat across to South Wales, because Paul had a relative who was a redcoat at Butlins at Pwllheli, so we thought we’d go there. 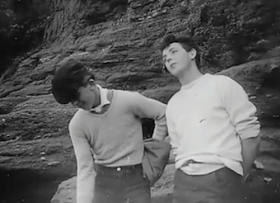 At Chepstow, we went to the police station and asked to stay in a cell. They said, ‘No, bugger off. You can go in the football grandstand, and tell the cocky watchman that we said it was OK.’ So we went and slept on a hard board bench. Bloody cold. We left there and hitchhiked on. Going north through Wales we got a ride on a truck. The trucks didn’t have a passenger seat in those days so I sat on the engine cover. Paul was sitting on the battery. He had on jeans with zippers on the back pockets and after a while he suddenly leapt up screaming. His zipper had connected the positive and negative end in the battery, got red hot and burnt a zipper mark across his arse.” 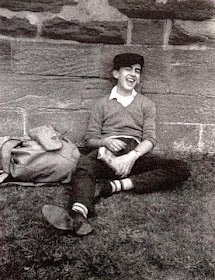 George Harrison in the summer of 1957