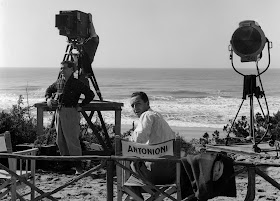 “Often to understand, we have to look into emptiness.”

"You know what I would like to do: make a film with actors standing in empty space so that the spectator would have to imagine the background of the characters."

"I mean simply to say that I want my characters to suggest the background in themselves, even when it is not visible. I want them to be so powerfully realized that we cannot imagine them apart from their physical and social context even when we see them in empty space."

"Till now I have never shot a scene without taking account of what stands behind the actors because the relationship between people and their surroundings is of prime importance." 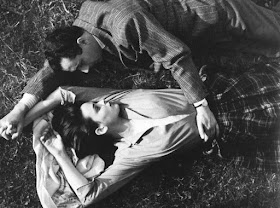 "A film that can be described in words is not really a film."

"A scene has to have a rhythm of its own, a structure of its own."

“What I reject is this refusal to let silence have its place, this need to fill supposed voids.”

"When I am shooting a film I never think of how I want to shoot something; I simply shoot it."

"Normally, however, I try to avoid repetitions of any shot."

"I rarely feel the desire to reread a scene the day before the shooting. Sometimes I arrive at the place where the work is to be done and I do not even know what I am going to shoot. This is the system I prefer: to arrive at the moment when shooting is about to begin, absolutely unprepared, virgin. I often ask to be left alone on the spot for fifteen minutes or half an hour and I let my thoughts wander freely."

"I may film scenes I had no intention of filming; things suggest themselves on location, and we improvise. I try not to think about it too much. Then, in the cutting room, I take the film and start to put it together, and only then do I begin to get an idea of what it is about."

"When a scene is being shot, it is very difficult to know what one wants it to say, and even if one does know, there is always a difference between what one has in mind and the result on film."

"In Blow-up I used my head instinctively!" 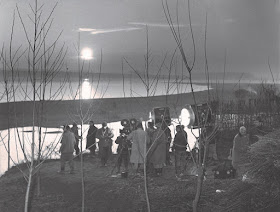 "I meant exactly what I said: that we are saddled with a culture that hasn't advanced as far as science."

"I don't want what I am saying to sound like a prophecy or anything like an analysis of modern society... these are only feelings I have, and I am the least speculative man on earth."

"Scientific man is already on the moon, and yet we are still living with the moral concepts of Homer."

"I am neither a sociologist nor a politician. All I can do is imagine for myself what the future will be like."

"A man who renounces something is also a man who believes in something."

"Hollywood is like being nowhere and talking to nobody about nothing."

"The moment always comes when, having collected one's ideas, certain images, an intuition of a certain kind of development- whether psychological or material- one must pass on to the actual realization."

"You cannot penetrate events with reportage." 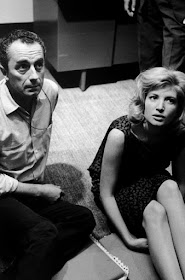 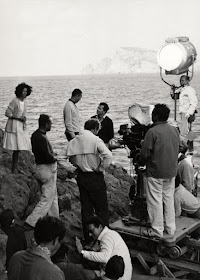 "We know that behind every image revealed there is another image more faithful to reality, and in the back of that image there is another, and yet another behind the last one, and so on, up to the true image of that absolute, mysterious reality that no one will ever see."

"I think people talk too much; that's the truth of the matter. I do. I don't believe in words. People use too many words and usually wrongly. I am sure that in the distant future people will talk much less and in a more essential way. If people talk a lot less, they will be happier. Don't ask me why."

"The greatest danger for those working in the cinema is the extraordinary possibility it offers for lying."

"All the characters in my films are fighting these problems, needing freedom, trying to find a way to cut themselves loose, but failing to rid themselves of conscience, a sense of sin, the whole bag of tricks."

"My work is like digging, it's archaeological research among the arid materials of our times. That's how I understand my first films, and that's what I'm still doing."

"When man becomes reconciled to nature, when space becomes his true background, these words and concepts will have lost their meaning, and we will no longer have to use them."

"People are always misquoting me." 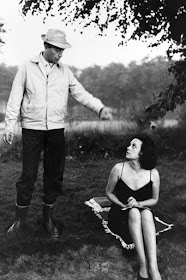 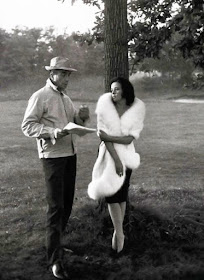 Michelangelo Antonioni gives directions to Jeanne Moreau on the set of La Notte, 1961 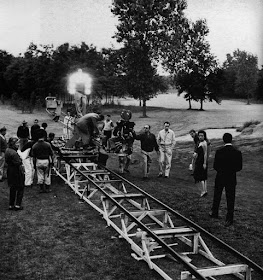 Jeanne Moreau and Marcello Mastroianni in La notte, 1961. To the right of
the camera, cinematographer Gianni Di Venanzo and  Michelangelo Antonioni. 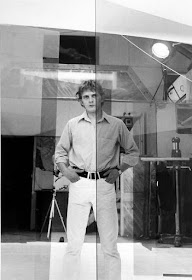 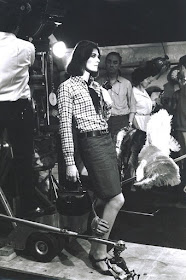