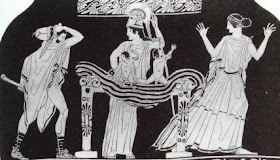 Hercules and the Serpents by Nausicaa Painter c. 450 BCE

Hercules grabs a snake with either hand as Iphicles reaches out towards a frightened Alcmene, and Amphitryon
prepares to strike the snakes with his sword. Athena stands calmly behind the cline.

“Daughter, there may yet be a happy escape
From present troubles for me and you;
My son, your husband, may yet arrive.
So calm yourself, and wipe those tears
From your children’s eyes,
And soothe them with soft words,
Inventing a tale to delude them,
Piteous though such fraud be.
Yes, for even men’s misfortunes often flag,
And the stormy wind does not always blow so strong,
Nor are the prosperous ever so;
For all things change, making way for each other.
The bravest man is he who relies ever on his hopes,
But despair is the mark of a coward.” 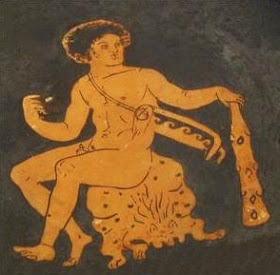 Herakles, The Son of Zeus and Alkmene

While Heracles is in the underworld obtaining Cerberus for one of his labours, his father Amphitryon, wife Megara, and children are sentenced to death in Thebes by Lycus. Herakles arrives in time to save them, though the goddesses Iris and Madness (personified) cause him to kill his wife and children in a frenzy.