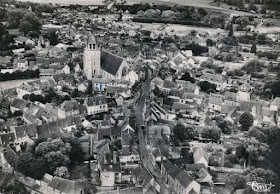 ’‘Combray at a distance, from a twenty-mile radius, as we used to see it from the railway when we arrived there
every year in Holy Week, was no more than a church epitomising the town, representing it, speaking of it and for it
to the horizon, and as one drew near, gathering close about its long, dark cloak, sheltering from the wind, on the open
plain, as a shepherd gathers his sheep, the woolly grey backs of its flocking houses, which a fragment of its mediaeval
ramparts enclosed, here and there, in an outline as scrupulously circular as that of a little town in a primitive painting.
To live in, Combray was a trifle depressing, like its streets, whose houses, built of the blackened stone of the country,
fronted with outside steps, capped with gables which projected long shadows downwards, were so dark that one had,
as soon as the sun began to go down, to draw back the curtains in the sitting-room windows; streets with the solemn
names of Saints, not a few of whom figured in the history of the early lords of Combray, such as the Rue Saint-Hilaire,
the Rue Saint-Jacques, in which my aunt’s house stood, the Rue Sainte-Hildegarde, which ran past her railings, and
the Rue du Saint-Esprit, on to which the little garden gate opened; and these Combray streets exist in so remote a quarter
of my memory, painted in colours so different from those in which the world is decked for me to-day, that in fact one
and all of them, and the church which towered above them in the Square, seem to me now more unsubstantial than
the projections of my magic-lantern; while at times I feel that to be able to cross the Rue Saint-Hilaire again,
to engage a room in the Rue de l’Oiseau, in the old hostelry of the Oiseau Flesché, from whose windows in the
pavement used to rise a smell of cooking which rises still in my mind, now and then, in the same warm gusts
of comfort, would be to secure a contact with the unseen world more marvellously supernatural than it would be
to make Golo’s acquaintance and to chat with Geneviève de Brabant.“ 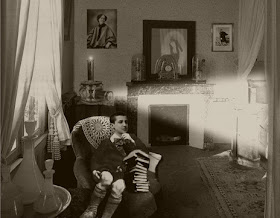 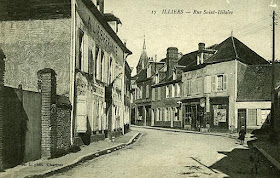 ’‘They were rooms of that country order which (just as in certain climes whole tracts of air or ocean are illuminated
or scented by myriads of protozoa which we cannot see) fascinate our sense of smell with the countless odours
springing from their own special virtues, wisdom, habits, a whole secret system of life, invisible, superabundant and
profoundly moral, which their atmosphere holds in solution; smells natural enough indeed, and coloured by circumstances
as are those of the neighbouring countryside, but already humanised, domesticated, confined, an exquisite, skilful,
limpid jelly, blending all the fruits of the season which have left the orchard for the store-room, smells changing
with the year, but plenishing, domestic smells, which compensate for the sharpness of hoar frost with the sweet savour
of warm bread, smells lazy and punctual as a village clock, roving smells, pious smells; rejoicing in a peace which brings
only an increase of anxiety, and in a prosiness which serves as a deep source of poetry to the stranger who passes through
their midst without having lived amongst them.The air of those rooms was saturated with the fine bouquet of a silence
so nourishing, so succulent, that I never went into them without a sort of greedy anticipation, particularly on those first
mornings, chilly still, of the Easter holidays, when I could taste it more fully because I had only just arrived in Combray” 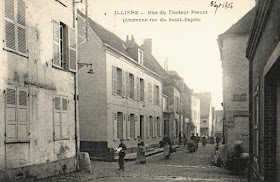 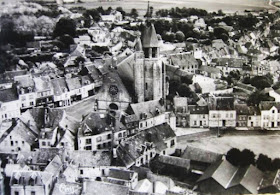 “While my aunt gossiped on in this way with Françoise I would have accompanied my parents to mass. How I loved it:
how clearly I can see it still, our church at Combray! The old porch by which we went in, black, and full of holes as a cullender,
was worn out of shape and deeply furrowed at the sides (as also was the holy water stoup to which it led us) just as if the gentle
grazing touch of the cloaks of peasant-women going into the church, and of their fingers dipping into the water, had managed by
agelong repetition to acquire a destructive force, to impress itself on the stone, to carve ruts in it like those made by cart-wheels
upon stone gate-posts against which they are driven every day. Its memorial stones, beneath which the noble dust of the Abbots
of Combray, who were buried there, furnished the choir with a sort of spiritual pavement, were themselves no longer hard
and lifeless matter, for time had softened and sweetened them, and had made them melt like honey and flow beyond their
proper margins, either surging out in a milky, frothing wave, washing from its place a florid gothic capital, drowning the
white violets of the marble floor; or else reabsorbed into their limits, contracting still further a crabbed Latin inscription,
bringing a fresh touch of fantasy into the arrangement of its curtailed characters, closing together two letters of some word
of which the rest were disproportionately scattered. Its windows were never so brilliant as on days when the sun scarcely
shone, so that if it was dull outside you might be certain of fine weather in church. One of them was filled from top to bottom
by a solitary figure, like the king on a playing-card, who lived up there beneath his canopy of stone, between earth and heaven;
and in the blue light of its slanting shadow, on weekdays sometimes, at noon, when there was no service (at one of those
rare moments when the airy, empty church, more human somehow and more luxurious with the sun shewing off all its rich
furnishings, seemed to have almost a habitable air, like the hall–all sculptured stone and painted glass–of some mediaeval
mansion), you might see Mme. Sazerat kneel for an instant, laying down on the chair beside her own a neatly corded parcel
of little cakes which she had just bought at the baker’s and was taking home for her luncheon. In another, a mountain of
rosy snow, at whose foot a battle was being fought, seemed to have frozen the window also, which it swelled and distorted
with its cloudy sleet, like a pane to which snowflakes have drifted and clung, but flakes illumined by a sunrise–the same,
doubtless, which purpled the reredos of the altar with tints so fresh that they seemed rather to be thrown on it for a
moment by a light shining from outside and shortly to be extinguished than painted and permanently fastened on the stone.” 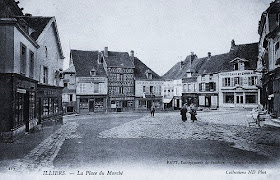 “Well met, my friends!” he would say as he came towards us. “You are lucky to spend
so much time here; to-morrow I have to go back to Paris, to squeeze back into my niche.“

“Oh, I admit,” he went on, with his own peculiar smile, gently ironical, disillusioned and
vague, “I have every useless thing in the world in my house there. The only thing wanting
is the necessary thing, a great patch of open sky like this. Always try to keep a patch of sky
above your life, little boy,” he added, turning to me. “You have a soul in you of rare quality,
an artist’s nature; never let it starve for lack of what it needs.” 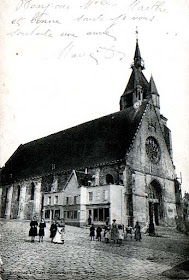 Combray is a commune in the Calvados department in Normandy in north-western France.

Combray is also an imagined village in Marcel Proust’s À la recherche du temps perdu
(In Search of Lost Time), a book which was strongly inspired by the village of his childhood,
Illiers, which has now been renamed Illiers-Combray in his honor. Combray is the title of the
first part of the first volume of À la recherche du temps perdu, titled Du côté de chez Swann
(Swann’s Way).
Κοινή χρήση