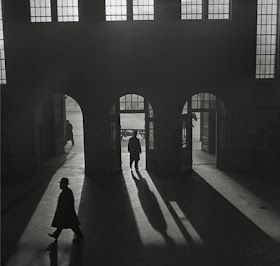 “Trains are relentless things, aren’t they, Monsieur Poirot? People are murdered and die, but they go on just the same.
I am talking nonsense, but you know what I mean.“
"Yes, yes, I know. Life is like a train, Mademoiselle. It goes on. And it is a good thing that that is so.”
“Why?”
“Because the train gets to its journey’s end at last, and there is a proverb about that in your language, Mademoiselle.”
“‘Journey’s end in lovers meeting.’” Lenox laughed. “That is not going to be true for me.”
“Yes–yes, it is true. You are young, younger than you yourself know. Trust the train, Mademoiselle, for it is le bon
Dieu who drives it.”
The whistle of the engine came again.
“Trust the train, Mademoiselle,” murmured Poirot again. “And trust Hercule Poirot. He knows.”

Agatha Christie, The Mystery of the Blue Train, 1928