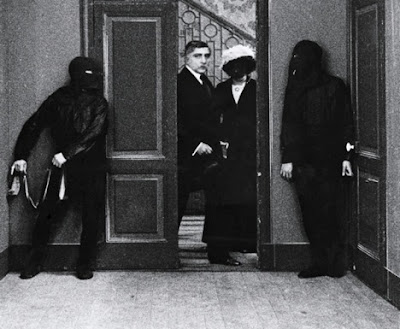 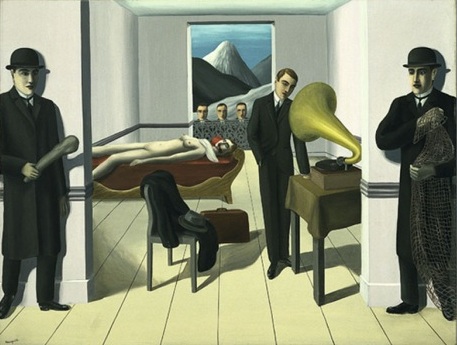 
René Magritte,  The Menaced Assassin, 1927, it presents a macabre yet curiously tranquil murder scene. The body, described by the chief theoretician of the Brussels Surrealists Paul Nougé as ‘a corpse of rare perversity’, is centre-stage with a scarf draped over its neck, its head diabolically severed from the body. We see the murderer pausing to listen to the gramophone, his expression remote and malevolent. Unbeknownst to the murderer are the assailants, two bowler hated men, waiting in the wings. An obsession with violent and sadistic crime - in reality and fiction, was a key Surrealist concern. For example, in Nadja André Breton likens beauty to a series of violent and expulsive shocks, akin to a train erupting from a station. 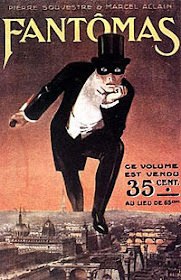 The cover illustration for the first volume of Fantômas, anonymous artist, 1911.


A « classic image of the Parisian oneirology », according to the French poet Robert Desnos.


The Surrealists - and Magritte in particular - were fascinated by Fantômas, an elusive arch-villain anti-hero and sociopath who murdered with sadistic ruthlessness. The character became popular in early 1900s through the serialised pulp novels of Marcel Allain and Pierre Souvestre. These stories were adapted for film and The Menaced Assassin actually appropriates a still from a 1913 Fantômas film.