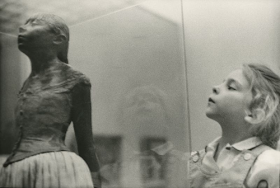 The Little Fourteen–Year–Old Dancer  is a c. 1881 sculpture by Edgar Degas of a young student of the Paris Opera Ballet dance school named Marie van Goethem. 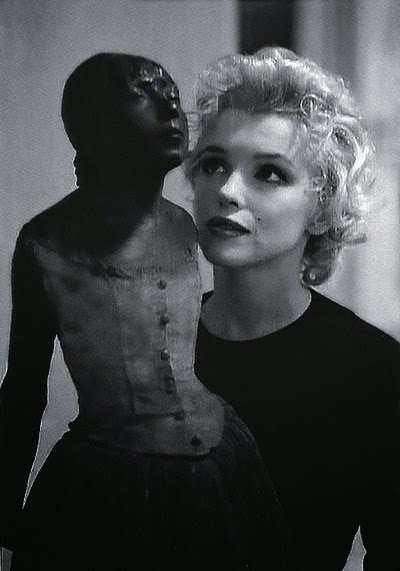 The exact relationship between Marie van Goethem and Edgar Degas is a matter of debate. It was common in 1880 for the "Petits Rats" of the Paris Opera to seek protectors from among the wealthy visitors at the back door of the opera.

When the La Petite Danseuse de Quatorze Ans was shown in Paris at the Sixth Impressionist Exhibition of 1881, it received mixed reviews. The majority of critics were shocked by the piece. They compared the dancer to a monkey and an Aztec and referred to her as a "flower of precocious depravity," with a face "marked by the hateful promise of every vice" and "bearing the signs of a profoundly heinous character." She looked like a medical specimen, they reported, in part because Degas exhibited the sculpture inside a glass case. 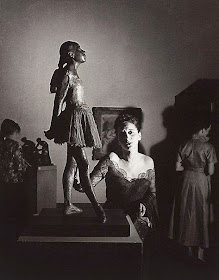 ''The life of the ballet girl was indeed harsh, and the choices she had to make just to survive sometimes backfired on her and her family members, who had rested all their hopes for success on her malnourished shoulders. An 1859 article published in London Society entitled “The Ballet Girls of Paris” played up the flip side of the pleasure-seeking fantasy for those ballerinas who gambled with their bodies and lost, saying that they were to be found “in hospitals, in streets begging, or worse, in asylums, in gaols, at the solemn little Morgue by the banks of the Seine—very rarely that we do not hear of them in places of misery, in the somber realms of wretchedness. Their lives are frail and brittle, and break often under their burdens.''

Marie van Goethem was one of those girls.

''Van Goethem family was obviously doing all it could to survive.
They lived close to Pigalle and the red-light district but also within walking distance of artists’ studios such as that belonging to Degas, who kept lodgings on the lower slopes of Montmartre. The artist knew the van Goethems, and as early as 1873, when the family lived on the boulevard de Clichy, Degas appears already to have started sketching the children, each of whom were students at the École de Danse, the Paris Opéra dance school. A notebook dating from around 1874 makes a reference to “Antoinette Vangutten—aged 12,” suggesting the older sister might have sat for some of his earlier dance paintings. But it was Marie who appears to have posed more frequently for the artist, both clothed and nude, affording Degas an opportunity to study her anatomy from every angle and at close hand. Degas was a committed studio artist, often working from live models paid between six and ten francs for a four-hour sitting at a time when a pound of meat cost a franc.'' 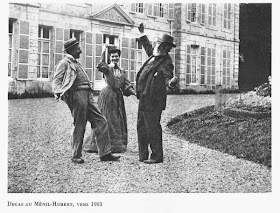 ''Edgar Degas was forty-seven at the time of the unveiling, but he had already been exhibiting his evocative images of ballerinas for almost a decade, starting in 1871. Degas haunted the backstage world of the Opéra, depending on the generosity of wealthier friends with subscriptions to get him backstage and into the foyer de la danse. His interest in the dancers went beyond the erotic, the glamorous, and the conventional. While his brother kept a ballerina as a mistress, there is no documentation to support that Degas himself ever had sexual relations with any of the ballerinas he portrayed and befriended. He was more interested in the cold, hard stamp of hard work and fatigue he saw imprinted on their bodies. He depicted them not as objects of desire but as spent and sweaty athletes, caught up in the banal act of their training. In sonnets, Degas extolled the truths and the illusions he encountered at the ballet: “One knows that in your world / Queens are made of distance and greasepaint,” he wrote around 1889. “The dance instils in you something that sets you apart / Something heroic and remote.” ''

Deirdre Kelly, Ballerina: Sex, Scandal, and Suffering Behind the Symbol of Perfection, 2012