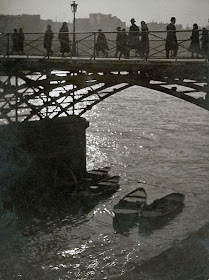 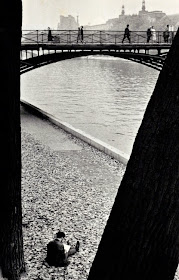 
The Pont des Arts or Passerelle des Arts is a pedestrian bridge in Paris which crosses the River Seine.
Between 1802 and 1804, under the reign of Napoleon I, a nine-arch metallic bridge for pedestrians was constructed
at the location of the present day Pont des Arts: this was the first metal bridge in Paris. 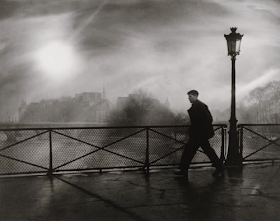 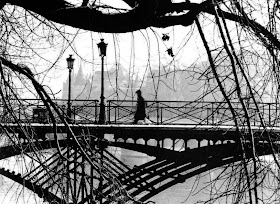 Claude Renaud, Pont des Arts, Paris 1963
"But now she would not be on the bridge. The thin glow of her face was probably peeking
into the old doorways in the Marais ghetto, or maybe she was talking to a woman who sells
fried potatoes, or she might be eating a hot sausage on the Boulevard de Sebastopol. In any
case, I went out onto the bridge and there was no Maga. I did not run into her along the way
either. We each knew where the other lived, every cranny we holed up in in our pseudo-student
existence in Paris, every window by Braque, Ghirlandaio, or Max Ernst set into cheap postcard
frames and ringed with gaudy posters, but we never looked each other up at home. We preferred
meeting on the bridge, at a sidewalk cafe, at an art movie, or crouched over a cat in some Latin
Quarter courtyard. We did not go around looking for each other, but we knew that we would
meet just the same. Oh, Maga, whenever I saw a woman who looked like you a clear, sharp
pause would close in like a deafening silence, collapsing like a wet umbrella being closed.
An umbrella, precisely. Maybe you remember, Maga, that old umbrella we sacrificed in
a gully in Montsouris Park one sunset on a cold March day."
Julio Cortázar, Hopscotch, 1963 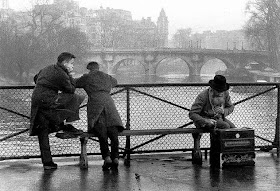 Willy Ronis, Le musicien du Pont des Arts, 1957
"Why was I coming to the Pont des Arts? It seems to me that on that December Thursday
I had intended crossing over to the Right Bank to have some wine in the little café on
the Rue des Lombards where Madame Léonie reads my palm and tells me of trips and
surprises. I never took you to have Madame Léonie read your palm, probably because I
was afraid that she would read some truth about me in your hand, because you have always
been a frightful mirror, a monstrous instrument of repetitions, and what we had called
loving was perhaps my standing in front of you holding a yellow flower while you held
two green candles and a slow rain of renunciations and farewells and Métro tickets blew
into our faces. So I never took you to Madame Léonie’s, Maga."
Julio Cortázar, Hopscotch, 1963 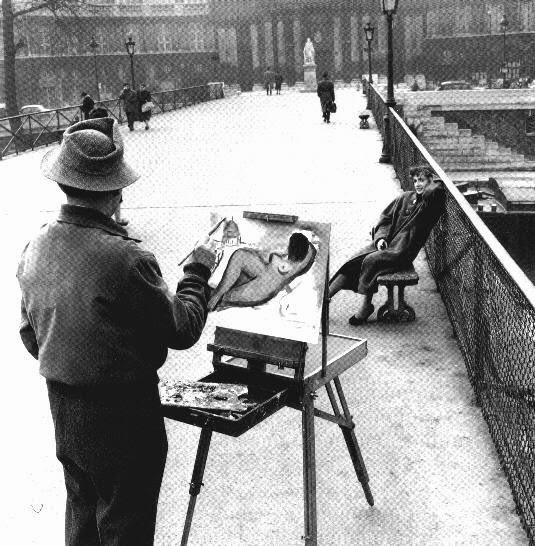 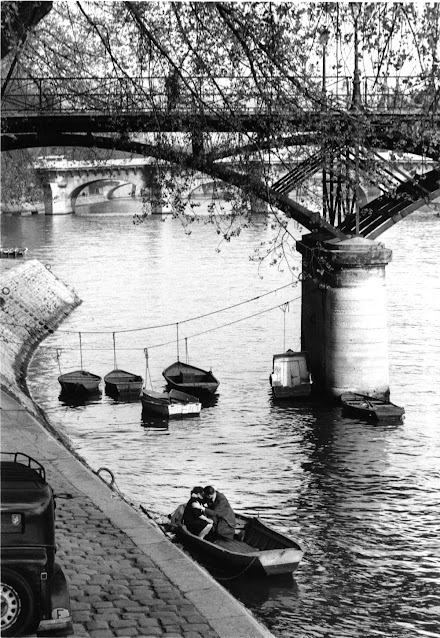