The Beginning of the Summer | Franz Kafka to Max Brod, 1904 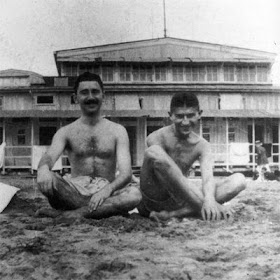 It is so easy to be cheerful at the beginning of summer. One has a lively heart, a reasonably brisk gait, and can face the future with a certain hope. One expects something out of the Arabian Nights, while disclaiming any such hope with a comic bow and bumbling speech—an exciting game that makes one feel cosy and all aquiver. One sits in one’s tossed bedding and looks at the clock. It reads late morning. But we paint the evening with subdued colors and distant views that stretch on and on. And we rub our hands red with delight because our shadow grows long and so handsomely crepuscular. We adorn ourselves, secretly hoping that the adornment will become our nature. And when people ask us about the life we intend to live, we form the habit, in spring, of answering with an expansive wave of the hand, which goes limp after a while, as if to say that it was ridiculously unnecessary to conjure up such things...

But we are not disappointed; this season which has only an end but no beginning puts us into a state so alien and natural that it could be the death of us. (>)

At the end of his first year of studies, Kafka met Max Brod, a fellow law student who became a close friend for life. Kafka was an avid reader throughout his life, together he and Brod read Plato's Protagoras in the original Greek, on Brod's initiative, and Flaubert's L'éducation sentimentale (Sentimental Education) and La Tentation de St. Antoine (The Temptation of Saint Anthony) in French, at his own suggestion.