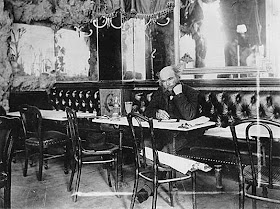 "For me my glory is an Humble ephemeral Absinthe
Drunk on the sly, with fear of treason
and if I drink it no longer, it is for a good reason."

The great French poet Paul Verlaine was another notorious absintheur. His family life
was less than ordinary: Verlaine’s mother kept the foetuses of her three earlier, miscarried
pregnancies preserved in jars in the pantry. Verlaine attacked his mother and then destroyed
these one day during an “absinthe fit”.

Verlaine began drinking as a teenager, and was already an alcoholic before he found absinthe.
His disastrous on-again, off-again relationship with Rimbaud aggravated both his alcoholism
and his mental instability, and culminated in a 5 year prison sentence for attempted murder.
In prison he had sworn off absinthe, and for several years after his release drank only beer
and worked steadily at his poetry. But by the 1890′s he was drinking heavily again, and had
become a well-known and pathetic figure in the Latin Quarter, sitting in a corner at the Cafe
Francois Ier on the Boulevard Saint-Michel or at La Procope, nursing absinthe after absinthe.

Verlaine’s last years were spent in and out of hospitals and institutions, were he was treated
for amongst other things cirrhosis of the liver, pneumonia, rheumatism, gonorrhea and syphilis.
During his last illness the hospital nurses would overlook the small bottles of absinthe his
friends tucked under his pillow; they knew he was too far gone now for such small pleasures
to make any difference.


Verlaine died in 1896, drinking to the end, although he had bitterly repented of his absinthe
addiction in his Confessions, published the previous year: 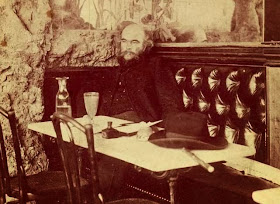