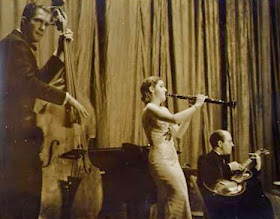 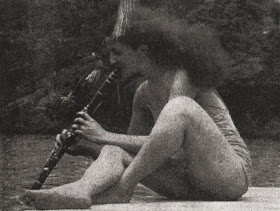 Ann DuPont (1915 - 1998), born Ann Bata in Universal, Pennsylvania, and raised in Florida. She began studying clarinet (and violin) at age nine and then played with bands in Florida and Louisiana (according to a brief piece in the July, 1939 issue of Downbeat), “absorbing the best jazz ideas from old masters.”

By the summer of ’39, with clarinetists Artie Shaw and Benny Goodman co-reigning over the kingdom of swing, Ann DuPont – described in the trades as “single, tall, auburn-haired” and billed by promoters as “Queen of the Clarinet” and “the female Artie Shaw” – had formed her own band with thirteen male musicians (called, perhaps not to alarm the superstitious, “Ann DuPont and her 12 Men of Music”) and was working hotels, clubs and one-nighters in and around New York. Downbeat praised her “wild, uninhibited style” and welcomed the presence of “a femme who plays good clarinet, and has looks to go with it … fronting a band that kicks.”

Ann sang with the band, too, it seems, which (with her reddish hair) would seem to have made her more “the female Woody Herman.” A 1943 profile in Billboard noted that she’d received an honorary “Doctorate of Solid Jive” from the College of the City of New York: “an honor matched only by Benny Goodman.” By ’43, Ms. DuPont had dispersed the big-band and was working with an all-male trio of piano, bass and guitar. (...)

She met her husband, George Maki, when he was lieutenant in the Navy, and she and her band were playing in Cape May, N.J. They were married on April 28, 1945, and eventually moved to Fairport Harbor, Ohio. Aunt Ann was a member of both the local musician's union and New York's famed American Federation of Musicians Union Local 802. Throughout the years, Ann played locally at various benefits, but she was quite a lady in other ways, too. She literally built two homes with her own hands and was a successful real estate salesperson. (...) 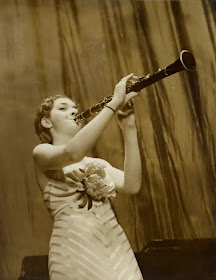 A bit of her wild, uninhibited playing can be heard on
“Oh Daddy, Please Bring That Suitcase In,” a 1945 78
by The Four Blues, an African-American vocal group somewhat in the style of the Golden Gate Quartet.