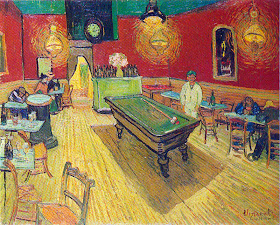 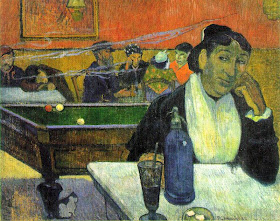 Van Gogh painted The Night Café in the September of 1888, when he lived alone in Arles. Gauguin moved in to live with him a month later, and painted the Night Café, Arles in November. We can easily discern that the two canvases depict the same place. This place, in fact, was the Café de la Gare, 30 Place Lamartine.

While Vincent van Gogh painted The Night Café (1888) as a ‘devil’s furnace’ ‘where one can ruin one’s self’ a place where drinkers are ‘ruined’ by depression and solitude, his fellow Gauguin portrayed the same venue from a very different angle in his Night Café, Arles (1888). Instead of merely presenting degradation, the French Post-Impressionist depicted a combination of conviviality and isolation. The juxtaposition between the two paintings suggests that van Gogh could have extracted lonesome elements from the scene to conjure a reflection of his overwhelming solitude.

Elements of depression and socializing coexist in Gauguin’s Night Café, Arles. While the two men on the left appear languid and desolated as one sits with a hunched back and the other sprawls on the table, both devoid of interaction, their adjacent table features a contrast, as four customers enjoy a leisurely conversation over their drinks in a small circle. The group appears engaged in their dialogues - the postman on the left seems to accentuate his words with hand gestures, while the opposite lady tilts her head as if she nods to show agreement. Smiling as she watches her customers, the café owner in the foreground appears to enjoy herself in the café rather than feeling depressed.

Since Gauguin had no apparent reason to fabricate the conviviality in Night Café, Arles, we can only conclude that perhaps van Gogh had excluded such an aspect when he painted The Night Café. This is possible as van Gogh felt overwhelming solitary at the time, because he had to live and work alone without Gauguin or any other company and probably found it hard to socialize with others without the help of alcohol to enliven himself. (...)


In August 1888 Vincent Van Gogh told his brother in a letter:
" Today I am probably going to begin on the interior of the café where I have a room, by gas light, in the evening. It is what they call here a “café de nuit” (they are fairly frequent here), staying open all night. “Night prowlers” can take refuge there when they have no money to pay for a lodging, or are too drunk to be taken in"

“ I have tried to express the terrible passions of humanity by means of red and green. The room is blood red and dark yellow with a green billiard table in the middle; there are four lemon-yellow lamps with a glow of orange and green. Everywhere there is a clash and contrast of the most alien reds and greens, in the figures of little sleeping hooligans, in the empty dreary room, in violet and blue. The blood-red and the yellow-green of the billiard table, for instance, contrast with the soft tender Louis XV green of the counter, on which there is a rose nosegay. The white clothes of the landlord, watchful in a corner of that furnace, turn lemon-yellow, or pale luminous green. "