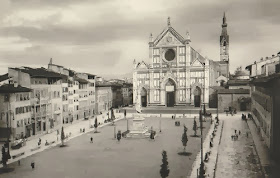 Stendhal's syndrome, hyperkulturemia, or Florence syndrome is a psychosomatic disorder that causes rapid heartbeat, dizziness, fainting, confusion and even hallucinations when an individual is exposed to art, usually when the art is particularly beautiful or a large amount of art is in a single place. The term can also be used to describe a similar reaction to a surfeit of choice in other circumstances, e.g. when confronted with immense beauty in the natural world.


The illness is named after the famous 19th-century French author Stendhal, who described his experience with the phenomenon during his 1817 visit to Florence in his book Naples and Florence: A Journey from Milan to Reggio.

When he visited the Basilica of Santa Croce, where Niccolò Machiavelli, Michelangelo and Galileo Galilei are buried, he saw Giotto's frescoes for the first time and was overcome with emotion.


"I was in a sort of ecstasy, from the idea of being in Florence, close to the great men whose tombs I had seen. Absorbed in the contemplation of sublime beauty... I reached the point where one encounters celestial sensations... Everything spoke so vividly to my soul. Ah, if I could only forget..."

"As I emerged from the porch of Santa Croce, I was seized with a fierce palpitation of the heart (that same symptom which, in Berlin, is referred to as an attack of the nerves); the well-spring of life was dried up within me, and I walked in constant fear of falling to the ground."