Caira / She Who Was Once the Helmet-Maker's Beautiful Wife | Auguste Rodin / François Villon, 1884-85 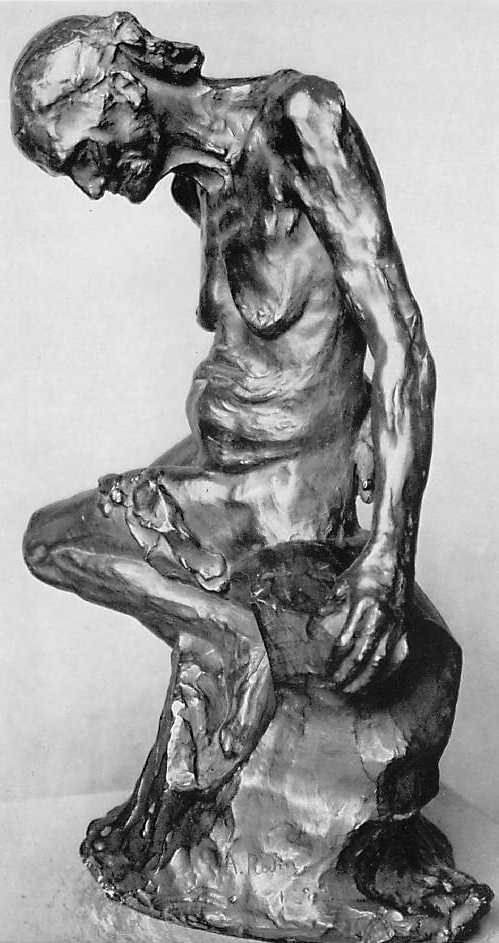 "Anybody can look at a pretty girl and see a pretty girl. An artist can look at a pretty girl and see the old woman she will become. A better artist can look at an old woman and see the pretty girl that she used to be. But a great artist-a master-and that is what Auguste Rodin was-can look at an old woman, protray her exactly as she is…and force the viewer to see the pretty girl she used to be…and more than that, he can make anyone with the sensitivity of an armadillo, or even you, see that this lovely young girl is still alive, not old and ugly at all, but simply prisoned inside her ruined body. He can make you feel the quiet, endless tragedy that there was never a girl born who ever grew older than eighteen in her heart…no matter what the merciless hours have done to her. Look at her, Ben. Growing old doesn’t matter to you and me; we were never meant to be admired-but it does to them."

"Ah, wicked old age
Why have you struck me down so soon?
[You] have stiffened me
so that I cannot strike
And with that kill myself!

When I think, alas! of the good times,
What [I] was, what [I] have become,
When [I] look at myself completely
naked
And I see myself so changed.
Poor desiccated thin, shriveled,
I nearly go mad!
What has happened to
my smooth brow,
My blond hair... .
My slender shoulders,
Small breasts, firm tighs
High, clean, perfectly made
For love's pleasures; (.....)
This is the fate of human beauty!
Shrunken arms and clenched hands
[And] completely hunchbacked.
What breasts! All wizened
Like my hips... ."

Also called She Who Was Once the Helmet-Maker's Beautiful Wife (Celle qui fut la belle heaulmière), a title taken from the poem "Les Regrets de la Belle Heaulmière" by François Villon (1431–ca. 1463), this sculpture derives from a bas-relief on the lower part of the left pilaster of The Gates of Hell. It is one of the many figures that Rodin extracted from the model for the monumental portal and reworked as individual sculptures to be purchased by collectors. The subject for this figure was an Italian woman who had once been a professional model. Rodin used her aged body for several studies and for groups of figures, as well as for this starkly realistic sculpture. In the Paris Salon of the Société Nationale des Beaux-Arts in 1890, it was called simply Old Woman (Vielle femme), suggesting that both titles, The Old Courtesan and She Who Was Once the Helmet-Maker's Beautiful Wife, may have been fanciful afterthoughts.