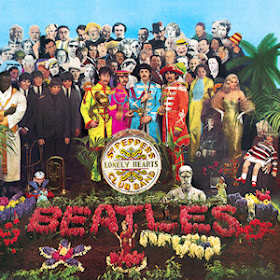 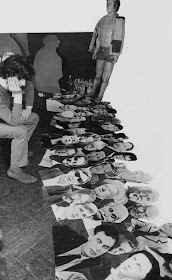 "In my mind I was making a piece of art
rather than an album cover. It was almost
a piece of theater design."
Peter Blake

“I offered the idea that if they had just played
a concert in the park, the cover would be a
photograph of them with the group who had
watched the concert. If we did this by using
cardboard cutouts, it could be whomever they wanted.”
Peter Blake

Each of the four Beatles was told to compile a list of people they admired, and their choices would all be featured on the album's cover. Ringo, always the least pretentious of the four, declined right off the bat. "Whoever the others choose is okay with me," Ringo said.


John Lennon's off-kilter mind immediately came up with Adolf Hitler and Mohandas Gandhi. Hitler was immediately nixed for obvious reasons. But, incredibly, a paper cutout of Adolf Hitler was actually made and was there at the photo session on March 30, 1967. Legend has it that Hitler was actually in the final shot, but during the session, one of the Beatles stood in front of him, covering the camera's view. Gandhi got the axe by EMI executives, believing it would hurt album sales in the Far East. 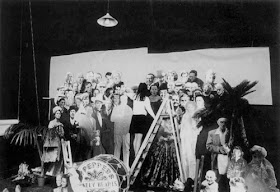 George, “the mystic Beatle,” of course, chose four Indian gurus. Bob Dylan was a clear choice by all the Beatles, who worshiped Dylan.

Fred Astaire was definitely a “Paul” choice. The legendary dancer was an easy sell and was reportedly delighted to be featured. However, despite Paul’s initial assurance to EMI that all the requested “guests” would “love to do anything to please us,” several of the chosen figures gave EMI more than a bit of difficulty. Shirley Temple asked to hear the finished product produced before giving her consent.


The Beatles all wanted Mae West to be on the cover, but she was apprehensive. “What would I be doing in a lonely heart’s club band?” Mae asked. To placate the legendary sex symbol, all four Beatles wrote and signed a letter to Mae, and she finally agreed. 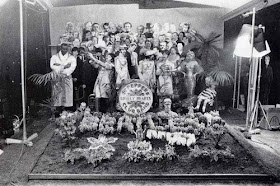 Paul was to say they chose some of the figures because they liked their "groovy-sounding names" and gave Aldous Huxley and Karlheinz Stockhausen as examples.


The oddest choice? Well, maybe it was Sonny Liston, the boxer who was twice defeated by Muhammad Ali, who The Beatles had met in person a few years previously. Liston had attended a Beatles concert that same year (1964), hated the boys, and said, "My dog drums better than that guy" (referring to Ringo). 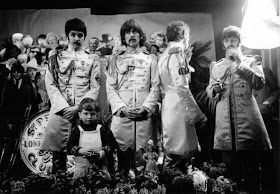 The most touching featured tribute was to the Beatles' former bandmate, bass player Stuart Sutcliffe. Stu died tragically in 1962, at the age of 21, from a head injury. Poor Stuart never lived to see all the band's future success. John always considered Stuart his best friend (besides Paul) and John was probably behind choosing Stuart to appear.
Elvis was all four Beatles' supreme hero, especially in their early, formative years.


The cover was shot by photographer Michael Cooper on March 30, 1967. The four Beatles are seen wearing custom-designed military-style outfits made of satin dyed in Day-Glo colors. George and Paul can both be seen wearing their recently-awarded MBE medals. John was very ambivalent about the band receiving these medals, and declined to sport his MBE, choosing instead to don several generic medals he borrowed from the mother of former Beatle drummer Pete Best. The royal coat of arms of the United Kingdom can be seen on John's right sleeve. Paul is wearing a black Ontario Provincial Police armband.

Four wax dummies of The Beatles stand alongside the living members, these symbolizing the "old Beatles" sporting moptops and identical outfits.