Lucien Carr | The guy that brought the beats together / and the Hippos Were Boiled in Their Tanks | W. S. Burroughs & Jack Kerouac, 1945 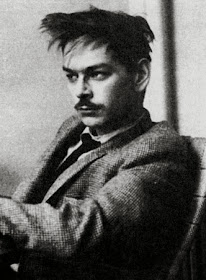 Lucien Carr was a key member of the original New York City circle of the Beat Generation in the 1940s; later he worked for many years as an editor for United Press International.

They would become legends — their names etched on the syllabuses of literature classes everywhere, their books reprinted and shoved in the back pockets of teenagers ripe with wanderlust, their words devoured, memorized, heeded, imitated.

But before the night of August 14, 1944, Jack Kerouac, Allen Ginsberg ’48CC, and William S. Burroughs weren’t the three principals of a literary movement — at least, not one that existed outside their own heads. They were simply roommates, friends, and confidants, who shared books and booze and sometimes beds. And, as history would largely soon forget, there was a fourth.

Lucien Carr was a recent transfer from the University of Chicago who seemed to attract admirers wherever he went. Uncommonly handsome, charismatic, and well-read, he was the force that initially united the group: he bonded with Ginsberg in a Columbia dorm over a shared love of Brahms, befriended Kerouac through his girlfriend at a nighttime painting class, and renewed ties with Burroughs, an old acquaintance from his hometown. Independent friendships formed between members of the quartet, but Carr was always at the center. 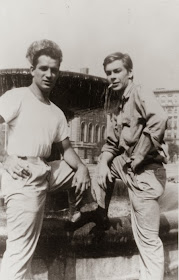 While his friends wrote books and became revered cultural and literary figures, ringleaders of the Beat movement, though, Carr lived most of the next sixty years in relative obscurity, quietly building a career and raising a family, and avoiding even the reflected glow from the spotlight on the others... 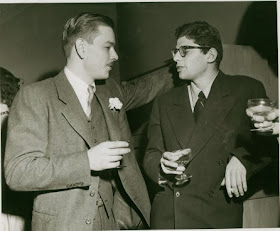 ''It was just after midnight when Kerouac got up from his table at the West End, where he’d been drinking with Carr, and went out into the sweltering, sleepless night. With his athletic gait, he quick-stepped across Broadway, through the 116th Street gates, up the Low Library steps, and toward Amsterdam Avenue, on his way to his girlfriend’s apartment, when he saw a familiar figure walking toward him in the dark: a tall, bearded, auburn-haired man named David Kammerer, who asked after Lucien. Kerouac directed Kammerer to the West End.'' 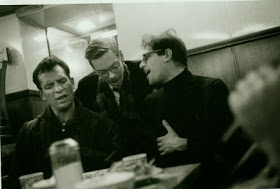 “And I watch him rush off to his death,” Kerouac later wrote in his autobiographical novel Vanity of Duluoz.''

''In Carr, the friends found an attractive iconoclast who harangued them with profane oratories about creativity drawn from Yeats and Rimbaud. In his journal, Ginsberg called Carr “my ideal image of virtue and awareness.” In And the Hippos Were Boiled in Their Tanks, a roman à clef co-written by Kerouac and Burroughs, Burroughs describes the Carr character as “the kind of boy literary fags write sonnets to, which start out, ‘O raven-haired Grecian lad ...’” To honor Carr’s beauty, as well as his snobbishness, Ginsberg and Kerouac invented an alter ego for him, a withering French aristocrat they named Claude de Maubris.''

''Kerouac referred to him in Vanity of Duluoz as “Shakespeare reborn almost.” To his new friends, Carr’s intellectual prowess was as compelling as his striking good looks: it was with poetry that he wooed Ginsberg, late-night intellectual sparring that won over the often stoic Kerouac, and his precocious worldliness that lured Burroughs uptown from his Greenwich Village apartment.''

“Carr was really important in getting the group together,” says Aaron Latham, who features the Kammerer slaying in his play, Birth of Beats, and who also wrote a 1976 New York magazine article about the then-forgotten case. “One key part of the Beat phenomenon was the group dynamic they had. Carr was the one friend that bridged them all.”


The most direct literary result of the murder was Hippos, a thinly veiled mystery novel told in alternating voices, which Burroughs and Kerouac produced almost immediately, completing a final version in 1945. They made repeated attempts to publish it over the years, though Burroughs later claimed that “it wasn’t sensational enough to make it [commercially] ... nor was it well-written or interesting enough to make it [from] a purely literary point of view.” (Near the alcohol-induced end of his own life, Kerouac readapted the material for Vanity of Duluoz.) When Grove Press eventually released Hippos in 2008, after all central parties were dead, the New York Times called it “flimsy” and “flat-footed,” noting that “the best thing about this collaboration between Jack Kerouac and William S. Burroughs is its gruesomely comic title.”

“Both of us had a lot to say, but there was no room to say it in, we were so tense and close.”

“So you want to wait. Tomorrow and tomorrow and tomorrow - waiting till you're dead. Do you know what I think? I think this whole Phillip complex is like the Christian heaven, an illusion born of a need, floating around in some nebulous misty Platonic nowhere, always just around the corner like prosperity, but never here and now. You're afraid to go away with him, you're afraid to put it to a test because you know it won' t work."

And the Hippos Were Boiled in Their Tanks, William S. Burroughs and Jack Kerouac, 1945