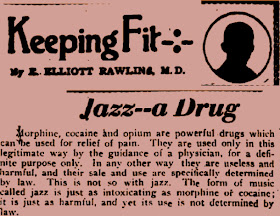 ...The form of music
called jazz is just as intoxicating as morphine or cocaine;
it is just as harmful, and yet its use is not determined by law. 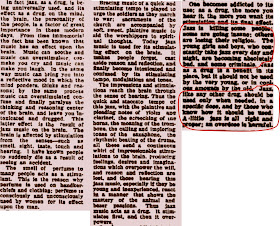 ...Jazz is killing some people; some are going insane; others are losing their religion. The young girls and boys, who constantly take jazz every day and night, are becoming absolutely bad, and some criminals.


...Jazz, like any other drug, should be used only when needed, in a specific dose, and by those who know how it should be used. A little jazz is all right and proper; an overdose is harmful.


The New York Amsterdam News, April 1, 1925. The Amsterdam News was another influential black newspaper, somewhat stodgier than the Chicago Defender. Like anyone else concerned about “respectability,” middle-class black people in the 1920s were not warmly receptive to jazz, which at the time was signified as the equivalent of gangsta rap, punk rock and death metal rolled into one. It was simply the most depraved thing to happen to music since ragtime. So here’s the paper’s medical columnist warning his public about the addictive and soul-destroying properties of this dangerous music... (source)