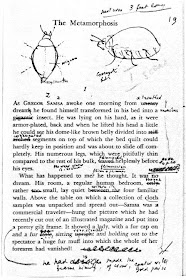 Nabokov’s drawings and annotations on the first page of Kafka’s the Metamorphosis.

"As Gregor Samsa awoke one morning from uneasy dreams he found himself transformed in his bed into a gigantic insect. He was laying on his hard, as it were armor-plated, back and when he lifted his head a little he could see his domelike brown belly divided into stiff arched segments on top of which the bed quilt could hardly keep in position and was about to slide off completely. His numerous legs, which were pitifully thin compared to the rest of his bulk, waved helplessly before his eyes."


“What if I slept a little more and forgot about all this nonsense.”

Vladimir Nabokov, teaching his students how to read Kafka, pointed out to them that the insect into which Gregor Samsa is transformed is in fact a winged beetle, an insect that carries its wings under its armoured back, and that if Gregor had only discovered them, he would have been able to escape. And then Nabokov added: “Many a Dick and a Jane grow up like Gregor, unaware that they too have wings and can fly.”